You are here: Home / Analysis / Wars and peace: history of Israeli ties with Arab world 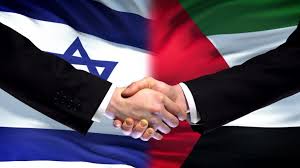 Israel, which on Tuesday was set to sign accords to normalize ties with the United Arab Emirates and Bahrain, has had a turbulent history with the Arab world, including eight wars, like reported by ynetnews.com.

The two Gulf states are the third and fourth Arab countries to establish formal relations with Israel, after Egypt and Jordan signed peace treaties with the Jewish state in 1979 and 1994, respectively.

Israel is created on May 14, 1948, formed out of part of Palestine three years after the end of World War II, when the Nazis killed more than six million Jews.

Israel immediately comes under attack by its Arab neighbors, but repels them.
More than 760,000 Palestinians are driven out or flee, becoming refugees.

In 1956, Israel attacks Egypt alongside Britain and France, which are seeking to overturn the nationalization three months earlier of the strategic Suez Canal.
They eventually withdraw under pressure from both the United States and the then-Soviet Union.

In June 1967, Israel wins a crushing victory over its Arab neighbors in the Six-Day War.

It seizes the West Bank, including east Jerusalem from Jordan and the Golan Heights from Syria as well as the Gaza Strip and the Sinai Peninsula from Egypt.
In 1973, Egypt and Syria launch a surprise attack on the Jewish holiday of Yom Kippur to try to win back their lost territories but are held off.

First peace treaty
The year after the historic visit in 1977 by Egyptian President Anwar Sadat to Jerusalem, Israel and Egypt agree on peace terms after talks brokered by the United States.

The Camp David accords are the first peace agreement between Israel and an Arab state.
The peace treaty is signed in 1979 by Prime Minister Menachem Begin and Sadat.

Lebanon invasion
In 1978 and again in 1982, Israel invades civil war-wracked Lebanon in a bid to halt cross-border attacks by Palestinian militants.

Israeli troops will remain in southern Lebanon until 2000.
Peace treaty with Jordan
A second peace accord, with Jordan, comes in 1994, signed by prime ministers Yitzhak Rabin and Abdel Salam Majali.

The first Palestinian intifada, or uprising, erupts in 1987.
It ends in 1993 when Israel agrees to limited Palestinian autonomy in the West Bank and Gaza Strip as an interim step towards a comprehensive peace agreement, which has yet to emerge.

The so-called Oslo accords are sealed with a historic handshake between Palestinian leader Yasser Arafat and Rabin, who is assassinated two years later by a Jewish extremist.

The second intifada breaks out in 2000 when right-wing Israeli opposition leader Ariel Sharon pays a provocative visit to the Al-Aqsa mosque compound in East Jerusalem.

The Israeli army reoccupies much of the West Bank in a series of large-scale military operations and begins building a separation barrier between the two communities.

In 2005, Israel withdraws all troops and settlers from Gaza after 38 years. It imposes a crippling blockade after Islamist group Hamas seizes control in 2007.
It carries out three deadly offensives against the territory in six years, the latest in 2014.

In December 2017, US President Donald Trump recognizes Jerusalem as Israel’s capital, a declaration condemned by the Palestinians, who regard east Jerusalem as the capital of their future state.

In May 2018, Washington transfers its embassy to Jerusalem.
In March 2019, Trump formally recognizes Israel’s 1981 annexation of the Golan Heights.

On January 28, 2020, Trump unveils a controversial Middle East peace plan that paves the way for the annexation of swathes of the West Bank by Israel.
Normalization with UAE, Bahrain

On August 13, Trump, in a surprise announcement, says that Israel and the United Arab Emirates have reached a “historic” agreement to normalize ties. Under the deal, Israel agrees to “suspend” annexation of parts of the occupied West Bank, without saying for how long.

On September 11, Trump announces that Bahrain and Israel will also normalize relations.
The Palestinian authorities condemn the deal as a “stab in the back”.