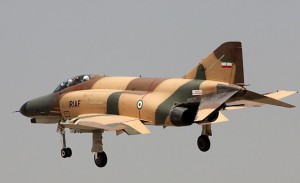 In late 2015 Iran announced that ground crews and other technical personnel at an air force base had spent 80,000 man hours to get three grounded aircraft (an American F-14, a Chinese F-7/MiG-21 and Swiss PC-7 trainer) back into service. The F-14 had been grounded for 14 years and the other two aircraft for seven. Iran has about 30 F-14s, with at least twelve of them flyable. The U.S. F-14 Tomcat is Iran’s most expensive warplane. Iran was the only export customer of this aircraft and received 79 of them in the late 1970s. Some F-14s have been kept flyable, despite the rumored sabotage of them and their weapons by American technicians in 1979. To demonstrate this, they sent 25 F-14s on a fly-over of Tehran in 1985. But over the next two decades age and problems obtaining spare parts saw the number of flyable F-14s dwindle. The F-7s are over 25 years old and difficult to keep flying even though China provides unofficial access to spares. The PC-7 is a jet trainer that is easier to maintain but still in need of spare parts that cannot be obtained legally.

The Iranian aircraft refurbishment program benefits from close ties to Russia and China as these two countries have an easier time getting, or building, spare parts Iran needs. This aid has apparently been increasing since 2005. Thus in 2013 Iran announced its maintainers had spent 45,000 man hours to get two Mirage F1 fighters back into flying condition. Iran received 24 of these aircraft from Iraq in 1991, when Saddam ordered most of his combat aircraft to fly to Iran and surrender (rather than be bombed by coalition aircraft). Iran kept all these aircraft but found it difficult to operate them, especially if none were already in the Iranian Air Force. The aircraft did not come with any support or maintenance equipment and especially no spare parts. Over the years, some parts and maintenance equipment were obtained, but in two decades these older aircraft, left outside most of that time, deteriorated.

Refurbishing means taking the aircraft apart, obtaining (via smugglers or local manufacture) new parts, replacing the defective ones and then reassembling it all. The two refurbished Mirage F1s managed to fly, but it’s unclear if they have been restored sufficiently to fight. This sort of thing seems like a useful way to keep ground crews busy when the air force can’t get enough money to let even the flyable aircraft fly much. Fuel and spares cost money, money that Iran does not have. Earlier news stories have mentioned similar refurbishing projects for F-5s, F-4s, and MiG-29s.

The Iranian problem is that three decades of sanctions has made it impossible to replace obsolete and worn out gear or even maintain the elderly systems they have to rely on. For example, Iran has been having increasing problems keeping its 1970s era F-5s flying. The ones that are still flying tend to crash a lot or not be available for use because of maintenance problems (including spare parts shortages). Spare parts for all U.S. aircraft Iran still uses have been hard to come by. Iran has managed, sort of. Nevertheless, the Iranian Air Force is largely a fraud. It has lots of aircraft that, for the most part, sit there but can’t fly because of age and lack of replacement parts. Those that can fly would likely provide target practice for enemy fighters.

The Iranian Air Force is still recovering from the effects of the 1979 revolution, which led to an embargo on spare parts and new aircraft. Despite that, many Iranian warplanes remain flyable but only for short periods. The main reason for even that is an extensive smuggling operation that obtains spare parts. Two of their aircraft, the U.S. F-4D and F-5E Tiger, were widely used around the world. Somewhere, someone had parts for these planes that Iran could buy. There are still about 40 of each type in service, with less than half of them flyable at any time.

Iran has sought to buy new foreign aircraft. In the 1990s, with the end of the Cold War and the collapse of the Soviet Union, they sought to buy from Russia. Despite the low prices, a combination of Western pressure (to not sell) and the lack of Iranian money for high-ticket items, not too many aircraft were obtained. One unforeseen opportunity was the 1991 Gulf War. Many Iraqi aircraft (most of them Russian-built) fled to Iran to avoid American attack. The Iranians never returned them. Iran ended up with up to 60 MiG-29s. There were also 18 Su-24s, a force that was expanded by more purchases from Russia. Black market spare parts have been available, but the MiG-29 is a notoriously difficult aircraft to maintain, even when you have all the parts you need.

Iran currently has about two hundred fighters and fighter bombers, but only about half can be put into action and then usually for only one sortie a day. The chronic shortage of spare parts limits the number of hours the aircraft can be flown. This means pilots lack good flying skills. The poor maintenance and untrained pilots leads to more accidents.