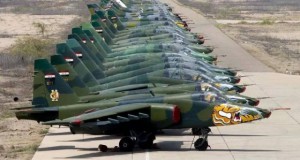 The Syrian Air Force (SAF) has, since the current civil war began in 2011, relied heavily on Russia and Iran to keep its aircraft flying and to replace combat losses. For example Iran upgraded several SAF Mi-17 helicopters with armor plates and FLIR cameras as well as basing Mojaher 4, Yasir and Shahed 129 UAVs in Syria and even providing an Il-76TD transport aircraft for the SAF to bring equipment in from Russia and Iran.

Lately Iran has also provided the SAF with ten Su-22 ground attack aircraft. These aircraft are from the 40 Iraqi Air Force Su-22s flown to Iran during the 1991 war. They were sent to Iran “for safekeeping” but Iran considered them war reparations and kept them. Due to embargoes and money shortages Iran was unable to refurbish these Su-22s until recently. Initially (in 19913) Iran consulted a Ukrainian firm about how long and how much it would cost to overhaul the Su-22s. It was too expensive and eventually (in 2013) Iran decided to restore ten Su-22 to operational condition without any foreign help by using other Su-22s and Su-20s as a source for spare parts.

The 16 ton Su-22 is the export version of the Russian Su-17, which is basically a swing wing version of the older Su-7 ground attack aircraft. Armed with two 30mm autocannon it can carry four tons of bombs. Originally rated for 2,000 flight hours and 20 years maximum service, this has been extended largely through the efforts of firms that specialize in refurbishing and upgrading Russian designed warplanes. The Su-22 has turned out to be reliable, cheap to maintain and operate and easy to refurb and upgrade.

Meanwhile Iran was supplying massive military assistance to its ally, the Assad government of Syria. The Syrians kept asking Iran and Russia for help in maintaining its hard-working combat aircraft. From 2011 the SAF fighter-bomber fleet found itself flying more sorties than it was these Russian aircraft were designed to handle. A growing number of these aircraft failed and crashed or simply wore out and had to be grounded. Russia supplied spare parts and technical help, but it wasn’t enough. Russia was unwilling to send replacement aircraft, Iran was.

The main problem was that the SAF was organized and equipped to fight a fierce but short war with Israel and never anticipated getting tangled up in a war of attrition with local rebels. As a result, all of Syria’s MiG-23BNs and most of the Su-22s, which were originally to be replaced in this decade are now being worked to the breaking point attacking the rebels and the civilians that support them. This led to decreasing availability of the MiG-23BN and Su-22 aircraft, which were often grounded for weeks at a time to allow for some much needed maintenance. In a growing number of cases fighters MiG-23MF, MiG-23ML(D) and MiG-29) took over the ground attack functions, something the aircraft were not designed for and their pilots not trained for.

At the end of the 2014 Iran decided to act and ordered the ten Su-22s to be partially disassembled and flown in Il-76s to Syria. At this point only the Su-22 fuselages had been completely overhauled and once arrived in Syria, the SAF and Iranian technicians completed the process. The first of these newly delivered Su-22s were viewed while bombing the town of Talbeesa, Homs Governorate, on the 9th of March 2015. The aircraft had a new camouflage paint job that appears to have been applied recently. The sighting of the aircraft comes amidst a series of discoveries about Iran’s increasing military presence and exports in Yemen, Sudan, Libya, Iraq and of course Syria, and follows a widely covered exercise in which a mock-up aircraft carrier was destroyed by anti-ship missiles and fast attack craft.

The continued stream of military support to Syria shows the extent of the Iranian determination in their effort to support the Syrian regime, and once again shows how far the conflict is from finally reaching a conclusion. A lot of this military aid is at the expense of the Iranian armed forces. For example, until the order came down to ship the ten Su-22s to Syria personnel from the Iranian Revolutionary Guard (the personal army of the clerics that hold ultimate power in Iran). (On strategypage.com)