You are here: Home / Mediterranean / Warplanes in Libyan skies may signal airstrikes are imminent 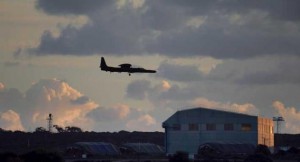 Over the past days American drones or spy planes have been making low passes over Sirte, the local headquarters of Islamic State. There include the squat, white Lockheed P-3 Orions, and other dark drones.

With the intensification of bombing of the terror group in Syria, Libya’s sky watchers think airstrikes are imminent.

Speculation about airstrikes heightened last week when the UN reported what intelligence agencies have been saying for months – that Libya has become Isis’s fallback position.

More than 800 fighters sent from Libya to battle in Syria and Iraq have now made the journey the other way, as Isis expands its Libyan caliphate.

Last week France flew its first reconnaissance missions over Sirte, joining the drones and spy planes of the United States. This small town on Libya’s central coast was the birthplace of former dictator Muammar Gaddafi – and the scene of his brutal execution.

Now the town’s giant concrete Ouagadougou conference centre is bedecked with black flags. The grounds outside are bloody execution sites for the terrorists who have brought Raqqa-style horror to north Africa. Recent escapees tell of a litany of horrific acts, including crucifixions and townsfolk hanged from mechanical diggers and lampposts, some accused of being apostates, some of being spies.

Barbers are banned from shaving off beards and women are forced to wear dark robes, while zealots ensure that music is banned from radio stations. “People live for one thing, which is to get out,” said one resident, newly arrived in Tripoli, the capital far to the west.

Sirte’s airbase, the biggest in Libya, is being readied by Isis to take suicide planes, while 85 of the town’s children have been paraded as “suicide cubs”, ready to detonate themselves for the cause.

Sirte is the true prize, offering an airport, seaport and something Isis wanted more than anything else: oil. South of the town is the massive Sirte Basin, the centre of Libya’s oil industry. In a few months its units conquered the town and pushed south into the Sirte Basin, taking a 100-mile stretch of coastline. In January, it killed 22 Christians, 21 of them Egyptians, on the Sirte shore, triggering Egyptian airstrikes.

Many Ansar al-Sharia units defected to Isis, gifting it a base at Sabratha, 60 miles east of Tunisia’s border. Tunisia says Seifeddine Rezgui Yacoubi, the gunman who killed 38 tourists, 30 of them British, at Sousse, was trained at Sabratha, as were the gunmen who attacked tourists in the capital’s Bardo museum last March.

In fact, alarm bells about Isis expansion in Libya have been ringing all year. In the summer, the European Union high representative, Federica Mogherini, warned: “In Libya, there is the perfect mix ready to explode and in case it explodes, it will explode just at the gates of Europe.”

In October, Wolfgang Pusztai, Austria’s former Libya defence attaché, told the British parliament’s foreign affairs committee: “The more Islamic State is put under pressure in the Middle East, the more active it will be in Libya.”

Loudest of all has been France’s defence minister, Jean-Yves Le Drian, issuing periodic warnings that Libya has become the “hub” for Isis to supply terrorists and weapons to affiliated groups in Algeria and Mali and to Boko Haram in Nigeria.

Officials from the American military’s African Command, Africom, based in Stuttgart, have been visiting the region, the Guardian said, and, should the political decision be made, western forces are already deployed in strength around Libya’s borders.

Along with drones and spy planes, the US has bombers and Marine helicopter-borne units stationed in Spain and Italy. More US drones operate from two bases in Niger, guiding a 3,000-strong force of French paratroopers, Operation Barkhane, on the southern Libyan border against jihadi convoys passing out of the country.

RAF Tornados and Typhoons, newly arrived in Cyprus, are within strike range of Libya, as are jets on the French aircraft carrier Charles de Gaulle. And a dozen European warships are off the Libyan coast, currently tasked with an ineffective mission to intercept the country’s people smugglers.