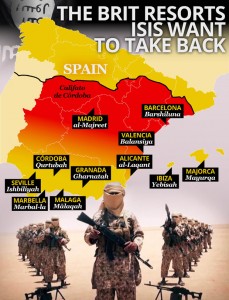 ISIS has issued “direct threats” against one of Britons’ favourite holiday destinations as a new report raises fears of a terror attack, like reported by mirror.co.uk .

Spain’s government has warned of the threats amid the latest signs that the militant group has encouraged sympathisers to launch catastrophic attacks.

ISIS has reportedly vowed to take revenge on Spain – visited by more than 12 million Britons every year – after anti-terror police arrested dozens of suspected militants in 2016.

Authorities have seen an alarming increase in the number of propaganda videos subtitled in Spanish and aimed at possible recruits in Spain.

The government document reveals that the jihadist group is stepping up its efforts to hire Spanish translators, suggesting plans to attract Spanish-speaking foreign fighters, the Olive Press reports.

The warning comes after a number of terror attacks claimed by ISIS – including attacks on a Christmas market in Berlin and Bastille Day fireworks in Nice, France, last year.

Holidaymakers have expressed fears of beach attacks in Europe amid threats from terrorists and following a massacre in Tunisia.

David Videcette, a former Met Police counter-terrorism officer who investigated the 7/7 bombings in London, told the Olive Press that an attack in Spain was “very possible”.

He said seaside resorts with wide-open promenades are particularly vulnerable to truck attacks similar to those seen in Berlin and Nice.

He added: “They may well be looking to attack specific countries with tourists.

Last week police in France arrested a 16-year-old girl and her boyfriend over an alleged plot to launch a suicide attack in Paris.

The girl was arrested after she pledged allegiance to the terror group in a video posted online.

Materials used for bomb making were allegedly found in the couple’s home.