You are here: Home / MidEastGulf / War on Islamic State has given Jordan new life 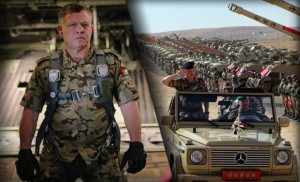 While much has been made of how the war against Islamic State gives Iran a chance to increase its influence across the Middle East, another country has already parlayed the violence into tangible gains: Jordan.

Just a decade ago, the tiny, oil-poor Hashemite kingdom had all but slipped off the West’s radar, no longer needed as a forward bulwark against Saddam Hussein. Today, Jordan is a pivotal member of the anti-jihadist coalition, with a vibrant economy and a military being armed to teeth by the U.S. and regional allies.

Consider this: In 2003, the year of the Iraq invasion, the U.S. gave Jordan $950 million in economic assistance and $612 million in military aid. By 2011, those figures were down to $362 million and $300 million. Jordan’s other benefactors followed suit: Overall aid plummeted from nearly 13 percent of gross national income in 2003 to under 4 percent from 2006 through 2011.

Down went the economy. Per-capita gross domestic product, which soared by 9 percent the year after the Iraq invasion, was down to 1.3 percent growth in 2010, even as neighbors prospered.

Economic doldrums begat political stagnation. The 10-year, reformist “National Agenda” of King Abdullah, introduced in 2007, never became much more than words on paper. In 2004 and again in 2008, there was widespread domestic concern — somewhat justified — that with Israeli-Palestinian negotiations foundering, the kingdom would be forced to merge with the West Bank into a sort of Jordanestine, in which Palestinians would form a majority population.

Then came salvation in the form of violent upheaval. First came the Arab Spring uprisings, which all but passed Jordan by as they turned the region upside down, burnishing the kingdom’s reputation for political stability. Then came the fight against Islamic State, a jihadist foe that the secular-minded Jordan, with its small but well-trained military, was uniquely suited to confront.

When Congress passed a measure speeding arms sales to Amman this February — shortly after Islamic State released the grisly video of a captured Jordanian pilot being burned to death — it marked the kingdom’s turnaround as a valued Mideast partner.

Overall U.S. aid for each of the next three years has been boosted to $1 billion, from $660 million in 2014. Washington has recently agreed to sell Jordan 260 Javelin and Hellfire anti-tank missiles; 92 Cougar armored personnel carriers; 100 Paveway laser-guided bombs, and a new targeting system for its F-16 fighter jet fleet. Jordan is one of the two sites where the Pentagon is spending more than half a billion dollars to train Syrian rebels to fight Islamic State. And it will get a hefty amount of the $2.1 billion Congress has appropriated for the White House’s Counterterrorism Partnerships Fund.

Military cooperation is also coming from Israel. The Jewish state has supplied its neighbor with surveillance drones and Cobra helicopters, and the two nations created a joint intelligence war room inside Jordan to keep tabs on Islamic State. The Jordanian press reports that the Israeli weaponry will be used to help carve out a “buffer zone” free of jihadist troops in southern Syria, similar to what Turkey is doing in the north.

The economy is looking up as well. New financial aid from Persian Gulf allies and elsewhere has pushed GDP growth to near 3.5 percent since 2013, despite the loss of Syrian trade and a refugee crisis at its northern border. The World Bank estimates that in 2016 the economy will see increased rates in private and government consumption, gross fixed investment, and exports and imports of goods and services. Inflation has eased, and the nation expects to hash out a $1.5 billion loan deal with the IMF. The global collapse in oil prices has helped too, since Jordan imports its energy.

The obvious upside for the rest of the world is the role Jordan can play against Islamic State. It can bring significant firepower to bear — over three days in February, Jordanian pilots carried out 56 bombing raids on Islamic State targets. The military has more than 100,000 active-duty troops, 750 tanks and 250 aircraft, including 38 F-16 fighters. Its 14,000-man special forces are considered among the best in the region. The nation’s proximity to the front is also important: not only is the U.S. training Syrian rebels there, a UAE fighter squadron is now operating out of Muwaffaq Salti airbase.

That’s just in the short term. Even more important is Jordan’s potential role in the Israel-Palestinian peace process. Should a two-state deal ever come to fruition, the nascent Palestinian entity will rely on Jordan for its economic and political survival. To begin with, nearly half of Jordan’s population now is Palestinian, and remittances from those families will be key to the new nation’s economy. Palestinians will also need trading partners and investors other than Israel. Excluding the Gulf states, Jordan has the Arab world’s highest “knowledge economy index” and its fledgling high-tech industries show real promise — telecom and information technology now comprise nearly 15 percent of the economy.

The key to Jordan’s long-term regional influence lies in political reform. Its well-educated citizens still have little political clout in a system where the prime minister and Senate members are all appointed by the monarch. Freedom House gives Jordan a score of six (seven being the worst) for political freedom; the press is muzzled; and the coldly efficient state-controlled justice system is one reason any sparks of the Arab Spring were quickly damped.

As the jihadist threat recedes over time, the U.S. would do well to condition further aid on Jordan’s progress toward the promises in Abdullah’s National Agenda, particularly expanding social inclusion, equality under the law and freedom of speech. But Washington should not make the same mistake it made a decade ago. After Islamic State is defeated, it cannot abandon its tiny ally.