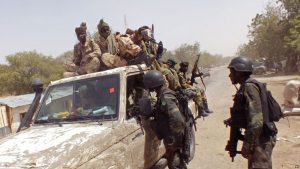 The head of the multinational task force fighting Boko Haram says the war against the militants is being won, but warned that suicide bombings remain a threat, killing close to 400 people in Nigeria and Cameroon since April, like reported by voanews.com.

Soldiers from the 7,800-person task force have been stationed in several towns and villages along the Nigeria-Cameroon border since those communities were liberated from Boko Haram a little over a year ago.

The force’s commander, Nigerian-born General Lucky Irabor, visited four communities along the border on Saturday to reassure local residents and rally the troops.

“Boko Haram and other criminal gangs, their end has come. Boko Haram is on the downward trend,” Irabor told the soldiers. “That alone should motivate you to know that the war is being won, and for you to give in the last of your energy and your commitment so that they would be completely defeated.”

Irabor ordered the soldiers to focus on stopping suicide bombers, and to work more closely with local self-defense groups. He urged civilians to report anything or anyone suspicious.

The Boko Haram conflict has displaced over two million people in four countries, but the governments of Nigeria and Cameroon are urging people to go home.

Irabor said the soldiers’ presence in villages will keep Boko Haram from taking them back.

However, security is not the only challenge the returnees face.

Aboubakar Bouba, an elder of Budua village on Cameroon’s northern border with Nigeria, returned home in August. He fled Budua after a Boko Haram attack in 2014.

The 75-year-old says the loud sounds of bombs that destroyed their village mosque, killing several people including their imam, also ruptured his eardrums.

A soldier asked Bouba how life has been in his village since he returned. Bouba said he is poor and lives on food aid from well-wishers and neighbors. He says he hasn’t seen his children since 2014, when they also fled.

The village, once home to 200 people, is now inhabited by approximately 70. The residents say they are hungry, but the fighting has devastated farmland, leaving farmers unable to cultivate crops or take care of livestock.

Cameroon’s government has announced plans to provide seeds to farmers and financial aid to unemployed youths to start small businesses, but the people of the village say they are still waiting.