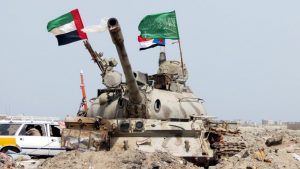 The Arab coalition to restore legitimacy in Yemen reported last month that it had thwarted a Houthi terrorist operation targeting a Greek oil tanker in the vicinity of the Bab Al-Mandab strait. According to the coalition sources, an explosive laden speedboat was used in the attack, like reported by ahram.org.eg.

On Saturday, the United Kingdom Maritime Trade Operations (UKMTO) naval authority reported that it was aware of an attack on a vessel off the coast of Yemen. The authority later updated the advisory notice on its website to say, the “incident is now complete. Vessel and crew are safe.” UKMTO gave no further details.

The two attacks mark a dangerous precedent that indicate that Houthi militias, with Iranian support, have begun to escalate hostile activities targeting international commercial navigation in the Red Sea. Previous attacks carried out by the Houthis were restricted to vessels belonging to coalition members or its main allies.

The Saudi-led Coalition also reported that the Houthis planted 164 mines in the Red Sea near Bab Al-Mandab — an additional sign that the Houthis are bent on increasing the risks to international maritime traffic.

The escalation comes at a time of a growing Iranian footprint in Yemen following the arrival of Islamic Revolutionary Guard Corps (IRGC) commanders under diplomatic cover. In October, Tehran announced that it had appointed Hassan Eyrlou, an IRGC leader, as its plenipotentiary and extraordinary ambassador to Sanaa.

According to coalition reports since 2016, the Houthis have staged numerous terrorist attacks against coalition ships, starting with the UAE auxiliary ship HSV-2 Swift using a Chinese made C-801 missile. In October 2016, the Houthis fired several missiles against the USS Mason, but missed.

In January 2017, three mined dinghies struck a Saudi frigate west of Hodeida port as the ship was patrolling within the coalition’s zone of operations. The attack killed two crew members and injured three others. Two months later, Arab coalition forces intercepted three speedboats converging on several ships near the Yemeni port of Midi. In April of the same year, the Houthis struck a Saudi oil tanker near Hodeida. In July 2018, the Houthis struck two more Saudi tankers but inflicted only minor damage.

As the foregoing tells us, there is an upward trajectory in the Iranian-backed Houthi terrorist threat in the Red Sea. When we compare the recent operations to the abovementioned ones, we notice a number of significant trends. One is the salient qualitative shift towards a lack of discrimination between vessels belonging to coalition members/allies and those belonging to other nationalities. The tanker struck two weeks ago was Greek. It follows that there is a strong possibility that the Houthis and Iran have shifted to a strategy of threatening maritime traffic in the Red Sea in general.

Also significant is the diversity in means: maritime mines, missiles (made in China and modified in Iran), and, with greater frequency, explosive laden boats. The latter means might be favoured because it is easier to use and may cause more damage. The preference may also be influenced, on the one hand, by the lack of precision in striking targets at long range, as was the case with the USS Mason and, on the other hand, by the fact that speedboats can pack a bigger explosive charge than a single mine and also pursue their targets.

Another possible reason behind this development is that Iran wants to shift the thrust of its threat from the Gulf to the Red Sea by way of the Arabian Sea, which is less of a sign of a decision to reduce the level of threat to the Straits of Hormuz as it is a sign of a strategy of augmenting the threat to maritime routes. As for the use of a proxy for this purpose, Iran realises that if it undertook such an attack itself it would invite an American response, which President Donald Trump had said he was ready to deliver.

The types of ships attacked offer further insight into Houthi/Iranian strategy. That most of the attacks target oil tankers is clearly meant to deliver a message that says that imposing sanctions against the Iranian petroleum sector will elicit a response in kind.

The Houthis would be motivated by similar reasons. The coalition has a chokehold on oil supplies through Hodeida Port, which helps explain Houthi attacks against Aramco facilities and the petroleum derivatives facility in Jeddah. Such factors confirm that the Houthis’ strategic aim is to use the terrorism weapon against the movement of oil as a pressure tactic and bartering card.

In light of the foregoing, it appears important to assess the efficacy of maritime safety measures in the coalition’s theatre of operations. According to figures available in Arab coalition reports, 60 per cent of attacks were intercepted and one (the attempted missile attack on the USS Mason) failed due to poor targeting (although the missile targeting the HSV-2 Swift hit its mark). As for the mined speedboat attacks, many were intercepted before reaching their target. In the recent cases when the payload struck the damage was limited. In general, there were no preemptive operations to thwart Houthi attacks.

The coalition has also been successful at mine clearing operations along Yemen’s western coast. However, it should be stressed here that the Houthis’ ability to strike in the vicinities of Bab Al-Mandab to the south and Muhra governorate to the southwest means they have a reach that extends well beyond their areas of control and influence. This is too large of an area for the coalition to safeguard on its own given the limited size and capacities of the Yemeni coast guard.

In addition, the two recent incidents (i.e., the strike against the Greek tanker and the one reported by UKMTO) reflect a lack of international support for the coalition’s operations in this region at a time when Iran and its Houthi proxy are increasing threat tactics in the region and when there is a greater need for intelligence and technical cooperation to deal with qualitatively different types of risks and the new directions they are taking.

Coalition leaders clearly expected more, as in the aftermath of the attacks against Al-Fujairah and Aramco last year, the US and other world powers said that they would work to safeguard maritime traffic in this region.