You are here: Home / Europe / War in Syria: Netanyahu brings both IDF chief and intelligence head to Russia 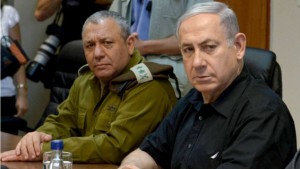 Israel sent not one but two members of the IDF General Staff with Prime Minister Benjamin Netanyahu to Moscow Monday, in an effort to hash out the precarious relationships between Israel, Russia, Syria and Hezbollah.

The presence of either one of these generals on this trip would be notable in itself. That both are traveling with Netanyahu is meant to demonstrate to both the people of Israel and the government of Russia the gravity of the situation on Israel’s northern border and the IDF’s intention to keep up airstrikes on high-priority Hezbollah targets in Syria.

Israel has admitted to targeting several Hezbollah and Syrian weapons facilities and convoys in the past several years, and it has been assumed that the Israel Air Force has carried out many more, despite officials’ refusal to claim responsibility.

Most such attacks have been against so-called advanced weapons systems — missiles and artillery guns, rather than rifles and grenades.

Putin, however, complicated Israel’s strategies vis-a-vis Hezbollah and Syria when he announced that the Russian military would be moving into the war-torn country, setting up in the port city of Latakia.

The presence of Russian soldiers in the country is an added obstacle for the IDF, which must now continue to prevent Israel’s enemies from obtaining dangerous weapons, without causing an international incident by killing an ally’s soldiers.

In 2013 and 2014, Israel was suspected of having carried out airstrikes on weapons sites in Latakia. With Russian military now present in the city, similar attacks may be more difficult to carry out.

Though the Israeli government has not released an itinerary for Monday’s trip, Eisenkot and Halevi will likely meet with their Russian army counterparts to address two related issues: preventing Hezbollah from obtaining Russian-made weaponry and Israel Air Force strikes against the advanced weapons systems already in the possession of the Iran-aligned militia.

Though some of Hezbollah’s arsenal comes from Iran, several of its deadliest weapons — the Kornet anti-tank missile, which has been deadly in combat against Israeli Merkava tanks, and the Katyusha rocket, which rained down on Israel’s northern cities during the Second Lebanon War in 2006 — come from Russia.

Though many of these weapons systems were intended for Syria, some have nevertheless ended up in the hands of Hezbollah, according to Nadav Pollak, a senior fellow at the Washington Institute for Near East Policy.

Some of the systems sold by Russia include anti-aircraft guns and surface-to-air missiles, which could be devastating to Israel’s air superiority in a future conflict with Hezbollah, Pollak said.

As head of intelligence, Halevi will likely present information to the Russian military, showing how these Russian-made weapons end up in the hands of Hezbollah, Pollak explained.

In addition to attempting to prevent further such transfers, Netanyahu, Eisenkot and Halevi will also discuss Israel’s plans to destroy those advanced systems the terrorist organization has already acquired.

As Hezbollah has been closely aligned with Russia’s ally Assad, this may be a sticking point with Putin, though it is not one Israel is prepared to give up on, Yossi Cohen, national security adviser to the prime minister, told the Israel Hayom newspaper Monday.

As Israel’s strikes against Hezbollah have taken place on Syrian territory, which violates its sovereignty, Pollak explained, “there is a chance that Russia will express its objection to this policy.”