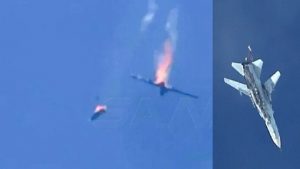 Turkish forces on Tuesday shot down a Syrian warplane over the northwest Idlib province, the Turkish defense ministry said, the third such downing in three days, according to thedefensepost.com.

Over the weekend Turkey launched the “Operation Spring Shield” military offensive against Russian-backed Syrian forces in the northwest.

“As part of the Spring Shield operation that is successfully continuing, an L-39 plane belonging to the regime has been downed,” the Turkish defense ministry said on March 3.

Syrian state news agency SANA reported that the plane was “targeted.” It was not immediately clear if the crew survived.

The Syrian air force is known to operate Aero L-39 attack aircraft and has deployed the plane against rebels throughout the civil war.

It’s the third such reported downing since Spring Shield began. Turkey said it shot down two other jets on Sunday and destroyed a Turkish drone along with air defenses. Ankara has also claimed to have killed more than 2,000 Syrian forces, numbers that have not been verified.

Turkish forces launched reprisals against regime targets in Idlib on Friday after dozens of Turkish soldiers were said to have been killed in Idlib province in a strike Ankara blamed on the regime rather than its main military backer Russia.

The newest phase in the Syrian conflict has pitted NATO member Turkey against its rival Russia and threatens to drag Turkey’s allies into the war in the northwest.

U.S. Special Envoy for Syria James Jeffrey and the U.S. Ambassador to the United Nations Kelly Craft visited Turkey’s Hatay province on Tuesday. Jeffrey is at odds with the Pentagon over Turkey’s request for Patriot missile defense systems along its southern border to defend against the regime, Politico reported on Friday.

Craft said her priority was making sure that border crossings remained open to allow aid into Syria.

The European Union’s High Representative for Foreign Affairs and Security Policy Josep Borrell will meet Turkish officials to discuss Idlib and the pending refugee crisis on the Turkey-Greek border.

President Recep Tayyip Erdogan said at the weekend that Turkey would no longer hold back millions of Syrian and other refugees who wish to reach Europe, in violation of a 2016 deal with the E.U.

Nearly three million Syrian refugees are already in Turkey, and Ankara is desperate to keep people languishing in Idlib province from coming over the Syrian border.

Russia and the Syrian government consider all of the rebels fighting Assad’s forces to be terrorists. Idlib, the last rebel pocket in the country following nine years of civil war, is largely controlled by the al-Qaeda-linked Hayat Tahrir al-Sham, but is home to millions of people displaced from other parts of the country. Nearly a million people have fled towards Turkey after the regime launched its current offensive in December.