You are here: Home / Mediterranean / War diaries in Libya: the clash of local militias 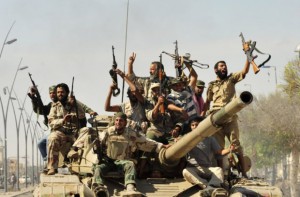 As a four wheel vehicle mounted by three fighters and a 14.5 machine gun departed from Sirte’s port, a trail of nine similar automobiles followed. Soldiers riding the convoy raised ‘V’ signs and chanted quotes of victory—they had just returned from battle with ISIS’ ultra-hardline militants.

The soldiers had been a part of the Libya effort called Operation Odyssey Lightning to free Sirte from terrorist hold. The operation includes U.S. military effort supporting the Libyan government against the ISIS terror group, Libya’s GNA had aligned forces to retake Sirte.

Five years after Libya’s dictator Moammar Gadhafi was deposed in a popular revolution, the country had remained trapped in a spiral of deteriorating security, economic crisis and political deadlock. Public trust in the nation’s weak government institutions has fallen to an all-time low as political elites, unable to agree on even a governmental structure, deploy armed militias to control territory and economic assets.

An additional challenge comes from ISIS and other violent extremists exploiting the situation to expand operations in Libya.

Meanwhile, a new, internationally recognized Government of National Accord, the product of a two-year United Nations-led process, continues its struggle to establish legitimacy and control beyond the capital.

Boubacar, a Libyan fighter waiting on the other side, raised his weapon in a gesture of glory mixed with happiness, believing that the approaching convoy of companion fighters was coming to aid in the fight against ISIS and help secure battle locations.

Soon enough, Boubacar’s gun was lowered, and a stupefied expression crossed his face as the regiment of nine packed vehicles passed right by him as if he were a stranded desert ghost, later disappearing into the heat of the southern arid desert.

Early on in the day, orders came in from Libya warlords ordering complete withdrawal. Boubacar along with fighters assigned to the ‘Lions’ brigade, partaking in the Operation Odyssey Lightning, stood in disbelief at what had happened. Victory was there to grab- ISIS militants at a disadvantage- yet soldiers were retreating.

A wave of depression hit the morale of Libya fighters, who at a young age had wasted away in their mission to hunt down and expel terrorists from their country. It is now apparent that the number of forces fighting ISIS had been gradually decreasing in Libya amid widespread confusion combined with rage and a hint of grief.

What remains a mystery is whether GNA’s elected Prime Minister Fayez al-Sarraj was informed of the withdrawal, despite him being the de facto official held accountable for the operation to free Sirte.

On a political level, even outlining the situation in Libya, namely Sirte, remains controversial– Tariq Al Qaziri, a political advisor at the national dialogue that elected Sarraj’s presidency and council, says that victory is nearing, while Justice and Construction Party’s official Jamal Harisha says that resolution for the war-torn country is far as the true status quo stands empowers militia warlords, leaving the GNA a symbolic value alone.

More so, on national division, Libyan Front commander Salahddine Abdulkarim , says that the true war is being fought the armed forces led by General Khalifa Haftar and not ‘some unruly militias’, referring to efforts spent by the GNA.

Although the Government of National Accord is now functioning, its authority is still unclear as specific details acceptable to both sides have not yet been agreed upon.

The second Libyan Civil War, an ongoing conflict, is among rival groups seeking control of the territory of Libya. The conflict is been mostly between the government of the Council of Deputies that was elected democratically in 2014, also known as the “Tobruk government”, which is led by General Haftar, and internationally recognized as the “Libyan Government”; and the rival Islamist government of the General National Congress (GNC), also called the “National Salvation Government”, based in the capital Tripoli. In December 2015 these two factions agreed in principle to unite as the Government of National Accord.

Asharq Al-Awsat newspaper had launched a series of investigations devoted to uncovering the truth behind the heated clashes with ISIS in Libya, especially in rubble-rendered Sirte.

It is evident that the political unrest in Libya, was the chief reason behind withdrawing forces from the field, even when the fighting against ISIS had started playing into Libya’s favor.