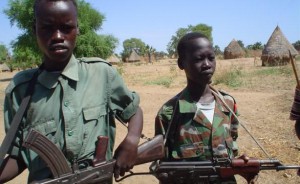 On 30th October, Channel 4, a UK-based television channel aired a documentary called ‘Frontline Family Reunions’ under its acclaimed ‘Unreported World’ series.  I participated in the making of the documentary, and I simply can’t resist the urge to share the emotional roller-coaster of this exhilarating journey with people who don’t live in the United Kingdom, and may have missed the opportunity to watch the touching documentary.

Let me start with a little bit of context. ‘Family Tracing and Reunification’ (FTR) is a child protection programme funded by UNICEF, UNHCR, Dutch Joint Humanitarian Response, and it is implemented by partners with Save the Children as the lead agency. It is designed to help reunify South Sudanese children who were separated from their families at the height of the war. The producers of Channel 4’s ‘Unreported World’ series picked interest in Save the Children’s FTR work, and they decided to send a television crew to come and join us on this particular reunification journey.

This was a journey with a difference – a journey from foster care in a UN Protection of Civilians (PoC) camp in Bor town, to family warmth in Akobo County in South Sudan’s Jonglei state. It started on Monday, 7th September, and it involved 14 children aged between 2 – 12 years who had been separated from their parents during the chaos and turmoil of war that engulfed South Sudan in December 2013.

The emotional drama started in the capital Juba. As is often the case in conflict contexts, our flight was cancelled at the eleventh hour due to “lack of security clearance” – never mind that we were already in the departure lounge armed with our boarding passes! If the cancellation was a disappointment for me and the television crew, then it must have been an excruciating anti-climax for the 14 anxious children who had been waiting for a whole 20 months for this day to come.

As the gods would have it, it was second time lucky for us, and we made it to Bor – the capital of Jonglei state where the 14 children were impatiently waiting for the helicopter journey into the warmth of their parents’ arms. A qualified Social Worker from Non Violent Peace Force, one of Save the Children’s FTR partners, was on hand to accompany the children for the one and a half hour flight to Akobo. Most of the children slept throughout the flight.

However, as the meandering River Akobo came into clear view, all spirits rose high – including that of the few adults in the aircraft.  All the children who had removed their shoes in order to sleep on the chairs woke up and reached for their shoes and hand luggage.  This was followed by a typical children’s scramble to ‘colonise’ a clear view on the small helicopter windows to enable them identify their parents. “Yes, my Dad…I can see my Dad.  I have not seen him for close to two years”, said one of the children as the helicopter landed for the big reunification moment. How can anyone not be moved by that?

Before the children disembarked, the door area of the aircraft was already crowded by parents waiting for their children. One particular man in a grey shirt and blue trouser caught my eye: He was restless, totally oblivious of other parents, and visibly eager to hug his long-lost children. Even before his children could pick their luggage, he grabbed them and started walking off. I could see that he was trying to put on a brave face, but his emotions overwhelmed him, and a torrent of tears rolled down his face.

As they walked towards a crowd of well-wishers gathered under a nearby acacia tree, his daughter also let loose her emotions and started crying uncontrollably.  My child protection instincts immediately kicked in, and I asked whether anyone had given the little girl some bad news about her family that shocked her. “No, it’s not that she has been informed of some unexpected news, she is just overwhelmed by typical reunification emotions,” said Save the Children’s Social Worker in Akobo.

In most communities in Africa, a child’s welfare doesn’t only concern everyone in the community – it is also everyone’s responsibility. The Akobo community, although afflicted by war, is no different. They all want the best for their children, and to live with their children. “…We want you to increase the effort to bring more children. There are many children – around 2,000, who are still in Bor and Juba,” said Mr. Tot Puy Majok, a respected opinion leader in Akobo.

Sadly, the figure of 2,000 given by Mr. Tot Puy Majok paints an incomplete picture of the ‘Family Tracing and Reunification’ challenge in South Sudan. The truth of the matter is that at present, there are 7,000 separated children on the database who have not yet been reunified with their parents. The same database also has a list of 3,000 parents looking for their missing children. Figures don’t lie, and they are clearly telling us that a lot more needs to be done to help these vulnerable South Sudanese children.