You are here: Home / MidEastGulf / War against ISIS: UK extends RAF Tornado airstrikes against Islamic State in Iraq until March 2017 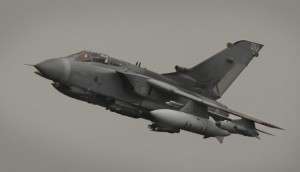 Continuous gains made by the Islamic State group in the Middle East have prompted the U.K. to extend its airstrikes against ISIS in Iraq by a year, Michael Fallon, the British defense secretary, announced Monday. As part of the move, the RAF Tornado squadron, which is spearheading Britain’s air campaign against ISIS in Iraq, will continue to remain in service until March 2017.

The Number 12 Squadron of the Tornado GR4 fighter bombers was earlier scheduled to be disbanded in March and replaced with a squadron of Typhoon air defense fighters. But, following the launch of airstrikes against ISIS last September, British Prime Minister David Cameron announced that the Tornado-led air campaign would continue until March 2016. This timetable has now been extended by a year.

“RAF Tornados have carried out hundreds of strikes, helping Iraqi forces push back Isil from the Kurdish region and out of key towns such as Tikrit and Baiji,” BBC quoted Fallon as saying. “We want to ensure we maintain this crucial operational tempo and so we will extend the lifetime of Number 12 Squadron for a further year to March 2017.”

Fallon, who is on a visit to Baghdad, said that British airstrikes have helped Iraqi forces drive ISIS fighters out of key towns. However, he discarded the possibility of Western forces joining the fight on the ground because Iraq had not made such a request.

Fallon also said that the second reprieve for the GR4 bombers, which operate out of Cyprus, would help the RAF retain “the essential precision firepower, intelligence and surveillance” capabilities needed to fight ISIS in the region.

The Tornado GR4 fighter bombers are fitted with precision-guided Paveway bombs and Brimstone missiles. The aircraft can also carry Raptor reconnaissance pods to conduct surveillance missions, the Guardian reported, adding that the GR4s, together with the RAF’s unmanned Reaper drones, have carried out more than 1,100 combat missions over Iraq, including over 250 airstrikes.

“ISIS terrorists pose a threat to the security of Iraq, Syria, the wider region and to the streets of Britain,” Fallon said. “It is therefore our duty to ensure that the UK continues to play its part to defeat this barbaric regime.”