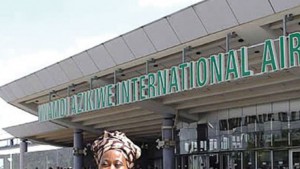 Security agents at the Nnamdi Azikiwe International Airport, Abuja, have arrested a Boko Haram member who was declared wanted by the Nigerian Army.

The director, Army Public Relations, Colonel Sani Kukasheka Usman, confirmed this in a circulated electronic mail to newsmen on Sunday.

This development is coming barely two weeks after the Chief of Army Staff, Lieutenant General Tukur Buratai published posters containing photos of the 100 most wanted Boko Haram kingpins in Maiduguri, the headquarters of ‘Operation Lafiya Dole’.

Aviation officers who may have seen the widely circulated posters were said to have recognised the wanted man as he was about to board a Lagos-bound flight.

“The declaration of 100 suspected Boko Haram terrorists has started to pay the desired dividend as one of them was arrested as he attempted to flee,” Col Usman said.

“Today (Sunday) at Nnamdi Azikwe International Airport, Abuja, a man suspected to be one of the wanted suspected Boko Haram terrorists, Chindo Bello, was apprehended by Aviation security as he was boarding Aero Contractors’ Airline flight to Lagos. The suspect has since been handed over to the military intelligence for interrogation and prosecution”, he stated.

The army spokesman lauded the security agents and good citizens for the tip-off that led to the arrest of the extremist.