You are here: Home / Analysis / Wahhabism Versus the Muslim Brotherhood: opening old wounds in Qatar 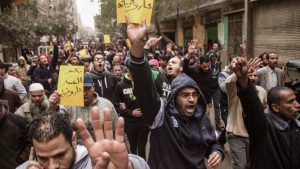 The contemporary Sunni world is divided into two main coalitions: Qatar, Turkey and Egypt in the Muslim Brotherhood camp; and UAE, Bahrein, Saudi Arabia as the representatives of Wahhabism, like reported by dailycaller.com.

The Muslim Brotherhood, formed by Hassan al-Banna in 1928, working ‘to achieve unification’ among the Muslim countries and states, mainly among the Arab nations, and liberating them from imperialism. It believes that Islam is not a religion, but a way of life. It advocates a move away from secularism, and a return to the rules of the Quran as a basis for healthy families, communities, and states. The group has branches in countries across the Middle East and North and East Africa, including Sudan, Syria and Saudi Arabia, Qatar and etc.

Wahhabism, a religious movement attributed to Mohammed Abdul Wahhab formed in eighteen centuries by the rise of Al-Saud regime which was affected by. Despite its intellectual bankruptcy,  Wahhabism was granted political power by Saudi petrodollars and Two Holy Mosques which led to its early consolidation.

The Muslim Brotherhood and Wahhabism, while both Salafist movements, have very different theories of government formation. Wahhabism is actually based on Takfiri doctrine, where ideological enemies are branded as not being true Muslims, a serious accusation. The Muslim Brotherhood’s political approach, however, has been to position its adherents of authority within the state.

Qatar’s Al-Thani ruling considers itself as a part of Abdul Wahhab generation looking upon him as their ancestor, while they do not have much faith in his doctrines as Saudis. The country further is more oriented towards Muslim Brotherhood. However, the group first originated in Egypt and during a specific period of time it was settled in this country (during the Presidency of Mohamed Morsi), and since then its power was concentrated more in Qatar and Turkey.

The recent crisis between Qatar and some of Gulf countries is the relighting the extinguished fire between Muslim Brotherhood and Wahhabism. Today, as the secret relationship between UAE and Saudi Arabia and their relations with ISIS and Al-Qaeda is inevitable, the relationship of Qatar, Turkey and Muslim brotherhood also needs no documentation.

During the past five years the groups attributed to this two fronts have fight against each other through proxy wars in some Middle East countries including Egypt, Syria, Afghanistan and Yemen, and the recent Qatar crisis actually unveils the opposition. However, Donald trump’s recent trip to the Middle East added fuel to the fire of this opposition.

These two fronts have broken the Sunni world into three branches, Wahhabism, Muslim Brotherhood and Secular, and Muslim Brotherhood among them has been more moderate and conservative. Although some attributed groups have taken extremist measures for absorbing Saudi petrodollars.

Having detailed information about the intellectual roots of Sunni world and Saudi Arabia as the representative of Wahhabi belief, its claim on Qatar as a state-sponsored terrorism is more like a joke than a reality. By flashing back to 9/11 and the country’s role in creation Al-Qaeda.