You are here: Home / Mediterranean / Voting on UN resolution for action in Libyan waters against smugglers was blocked by Angola, Nigeria and Chad 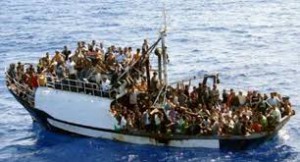 Voting on a resolution for action in Libyan waters at the United Nations Security Council is likely to be postponed due to the position of African countries, a diplomat of a Western member country of the UN Security Council told on Thursday.

Another diplomat did not rule out the document could be considered after the general political discussion at the United Nations General Assembly due on September 28 through October 3.

On September 22, Russian Deputy Foreign Minister Gennady Gatilov told journalists the resolution has been practically agreed and could be put for voting by Friday. He said Russia would support it as “it takes into account all of our concerns, primarily, linked with possible use of force against vessels which transport migrants.”

“Our key task was to ensure security and to prevent any force actions that might cause the death of these poor people,” he stressed.

On September 16, Britain’s Permanent Representative at the United Nations Matthew Rycroft said a resolution allowing the European Union and its single members to intervene in Libyan waters against boats smuggling migrants and refugees into Europe. The original text of the resolution, based on chapter 7 of the United Nations, authorized the EU and member state to “employ all necessary means to contrast human traffickers and migrant smugglers”. The resolution condemned “repeated tragedies resulting in the loss of hundreds of lives”. It stressed the need for “an international response to address the issue at the heart and prevent” exploitation of human beings by traffickers.

The resolution was necessitated by the fact that different laws applied in Europe. Thus, Italy already can seize vessels, but other countries, including Great Britain and Germany, which also take part in European operations, will first need approval by the United Nations Security Council.