You are here: Home / Europe / Visas issued in Libya and Algeria raise questions on security for EU members 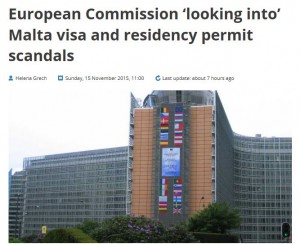 The issuing of visas and residence permits by the Maltese authorities in Libya and Algeria raises serious questions that could have an impact on the security of Maltese citizens and other Schengen member states, according to EPP Group chairman Manfred Weber.

In a statement issued yesterday in conjunction with David Casa, the Nationalist Party’s head of delegation in the EPP Group, Mr Weber said that the Schengen area was a major achievement by the European Union for its citizens but the member states enjoying its benefits also carried heavy responsibilities.

Referring to Prime Minister Joseph Muscat’s decision to suspend Schengen in Malta even after the GHOGM, Mr Weber and Mr Casa stressed that member states had a duty to ensure people entering the Schengen area through their territory did so in a legal way.

“Member states at the external EU border have an even higher degree of responsibility for the common safety. Regrettably, alleged corruption and abuse appear to have been prevalent,” they said.

In reaction, the Labour Party said Mr Casa was speaking against Malta’s interests and was toeing the same line as the Opposition and being “negative” in the same way the PN had acted on the selling of Maltese citizenship.

Mr Casa replied: “My duty is to the Maltese people. It is certainly not to play a part in covering up the shameful practices of this government. It is when institutionalised corruption is allowed to take hold that Maltese interests and the security of the Maltese people are prejudiced”.

He said Labour should understand it was not Malta. “You were elected to run it, which you are doing incredibly badly,” he said.