You are here: Home / MidEastGulf / Violent battles on outskirts of Arsal between Nusra Front and Islamic State 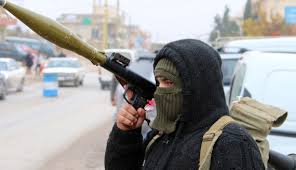 Fierce battles erupted on Wednesday on the outskirts of the northeastern border town of Arsal between al-Nusra Front-affiliate Jaish al-Fatah and the Islamic State of Iraq and the Levant (ISIL).

The army prevented owners and employees of stone crusher plants in the area from heading to the region.

The Lebanese army recently said that its role is limited to defending Lebanon’s land and border, refusing to interfere in the Qalamoun battle.

Meanwhile, unknown gunmen stole 1,500 liters of fuel from a petrol station in Arsal’s Wadi al-Rayaan area after they tied a worker.

Unknown knife-wielding attackers also stabbed Fatmeh Nabil al-Hujairi several times and robbed an amount of a money from her.

Despite ideological similarities, the Nusra Front and ISIL are opposed and in conflict with each other in other parts of Syria, particularly in the north.

Some 3,000 militants are in the Qalamoun region, a Hizbullah commander recently said. He said Hizbullah and Syrian troops surround the Qalamoun from the north, the east and the south, as well as part of the west, squeezing the Islamic militants who remain.

Hizbullah cites that fear of militants sweeping through Shiite and Christian villages in diverse Lebanon as one of the main reasons for their involvement in Syria.

Some observers however fear the Qalamoun offensive could prompt Islamist militants to launch attacks in Shiite areas of Lebanon itself, including Beirut’s southern suburbs.

A wave of bombings targeting Hizbullah strongholds in 2013 and 2014 left scores of people dead and wounded. Already, residents in a southern Beirut stronghold of Hizbullah say security has been tightened in the area, with officials searching cars and checking identification papers.