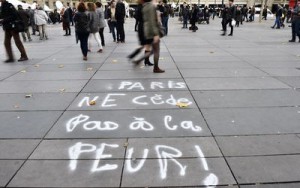 The brutal killings in Paris come on top of the downing of a Russian airliner in Sinai, the bombing of a Hezbollah stronghold in Beirut and an attack against Kurds in Ankara.

About 500 people have been killed in the past few weeks, and many more injured. Islamic State (IS) has claimed the first three, and is suspected of the fourth.

So how should we understand the strategy of the Islamist militants?

Do they want to draw foreigners in further, or frighten them away? I am not sure that is how they are thinking.

What Islamic State wants is continuing turmoil in Syria, and in Iraq, so it can control territory and resources to build up its “caliphate”. It is not seeking to overthrow Bashar al-Assad — the Syrian president is useful as a target of Sunni anger, and there has been tacit co-operation between Islamic State and the regime.

They avoid direct conflict, trade in oil and both target the more moderate militias.

IS wants the horrors of war and terrorism as a recruiting sergeant. The best option for them is a conflict that can be presented as Muslims against infidels, whether American, Russian or European.

A conflict pitching Sunni against Shia also helps: they want Sunnis in the Middle East and beyond to see them as their standard-bearer.

In the IS mind-set, the Paris attacks are a show of power. They keep the pot boiling and will draw more Muslims in Europe to their cause.

There are two things IS does not want. First is a full-blown ground intervention by the North Atlantic Treaty Organisation (Nato) or Russia, as this would quickly cost the militants their base in eastern Syria and western Iraq.

The group will calculate, probably rightly, that — in the wake of the wars in Iraq and Afghanistan — there is no appetite for that in western capitals or Moscow.

French President François Hollande’s talk of war is unlikely to result in Nato’s article five commitment to collective defence being triggered in any meaningful way. Second is a peace deal bringing a new government to Syria. If there were a settlement accommodating Syrian Sunnis — a big if, given it would require Assad’s departure — IS would lose its appeal.

That should reinforce the resolve of foreign ministers from the US, Russia, Europe and the Middle East who met in Vienna on Saturday to seek a political solution to the Syrian war.

Diplomacy will always reflect what is happening on the ground. Russia’s military intervention in Syria, targeting anti-regime forces, has strengthened the negotiating hand of the Kremlin and its ally, the Assad regime. If the West wants to shape the outcome, its military role will have to be less tentative than the current limited strikes against Islamic State and arms supplies to the less extreme anti-Assad militias.

Why did Islamic State attack France?

Well, Paris has been at the forefront of opposition to Islamist extremists in the Sahel and in Syria.

The French Muslim community is not well integrated — and, being mainly of north African origin, feels more involved in the conflicts in the Arab world than the south Asians in Britain or Turks in Germany, which has made them more susceptible to Islamic State rhetoric.

Some ask if there was a failure of intelligence that could have prevented the atrocity. We do not yet know. It was a complex, well-planned attack by skilled operatives.

Of course, some were known to the French security services — it would be much more alarming if they were all “clean skins”. We need to know how they planned, how they communicated, where they trained and what traces they left ahead of Friday.

French security services will have been working on these questions all weekend, supported by counterparts across Europe. They are battling to get on top of the escalating threat at home.

France’s Direction Générale de la Sécurité Intérieure, the internal service agency, is having to shift from its police methods to an intelligence-led approach to get on top of the modern threat.

French intercepting capabilities come under the external service and are not as easily directed against terrorists in France. Countering terrorism requires tight co-ordination of agent penetration, intercepts and bulk data analysis. Teamwork is vital.

In the UK, it was developed only after the 2005 London bombings.

Reform of the French services, already being driven by Manuel Valls, the impressively tough prime minister, is certain to be accelerated.

The next attack probably will not be in France. Islamic State wants to provoke division across Europe — in particular, hostility to the refugees flooding in.

It wants the far right to grow in strength, further alienating European Muslims. Germany might be vulnerable as Islamic State would see an attack as weakening Chancellor Angela Merkel and dividing opinion in that country.

It could just as easily be in London: according to Andrew Parker, head of MI5, the UK domestic security agency, six terror attacks have been foiled in the UK this year already — though none, I suspect, as extensive as what we saw in Paris.

Political calculation and available operatives will determine where Islamic State tries to strike next. There is little doubt that there will be further attacks. This will test not only British intelligence agencies.

The wars in Europe’s neighbourhood are now washing on to British shores and governments in Europe — especially France, Germany and Britain — will have to lead the response. Britain cannot expect the US to ride to its rescue.