You are here: Home / Europe / Vigilantes begin patrols in Norway amid migrant influx 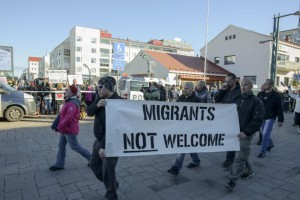 Norwegian police say a vigilante group calling itself the Soldiers of Odin has made a first appearance in the Scandinavian country amid an influx of migrants.

Vestfold Police spokesman Torgny Alstad says about a dozen men dressed in black jackets, adorned with a Viking helmet and the group’s name, patrolled the streets of Tonsberg near Norway’s capital on Saturday night. He said Monday that officers watched the group but that no incidents were reported.

The Soldiers of Odin, who derive their name from a Norse god, was founded last year in Finland where it regularly conducts street patrols. The group says it’s protecting residents from a perceived threat posed by migrants. The group claims about 600 members in Finland with groups in Britain, the U.S., Estonia, Germany and Sweden.