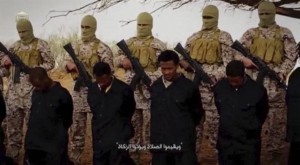 Brutal videos produced by the Islamic State group and others are part of a “psychological warfare” effort that requires a concerted response, a senior German security official said Wednesday to AP.

Officials in Germany and elsewhere have warned for some time that videos showing the killing of prisoners and other war crimes are being used to bolster the image of these extremist groups among potential recruits.

Among the increasingly slick clips to surface recently is one that calls on IS followers in Germany to carry out attacks such as those seen in Paris in January. German security officials say the video was voiced by Berlin-born Denis Cuspert, who was designated as a global terrorist by the U.S. in February.

“The shocking pictures aren’t just part of the highly professional media work of IS, they are also part of psychological warfare,” said Hans-Georg Maassen, head of Germany’s domestic intelligence service. “The only antidote to this is information about the gruesome reality.”

Maassen called for the “spell of IS to be broken,” citing the unabated flow of Islamic extremists travelling from Germany to Syria and Iraq in recent years. His agency estimates that the number of people travelling to the war zone has now reached 680. About a third of them have returned to Germany, including 50 who have combat experience.

Around 85 people from Germany have died there, he said.