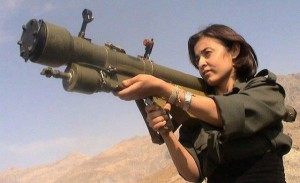 A video game will soon allow gamers to take on the Islamic State group [IS] as a woman Kurdish fighter, like reported by alaraby.co.uk .

Insurgency: Sandstorm is a tactical first-person shooter set in present day Iraq that focuses its story on a Yazidi Kurd who escapes IS captivity and fights back against the extremist group, developers New World said in a statement released on Wednesday.

“Thematically, the game is inspired by real events and people, however this is a fictional story and characters,” New World said.

“The narrative shifts the typical shooter inspiration away from blockbuster military power fantasy movies more towards a dark and understated indie film rooted in reality,” the company added.

The game’s protagonist has been enslaved by IS but manages to escape after a sandstorm engulfs the Iraqi village she is being held in.

She then joins a Kurdish militia, fighting the extremists and pushing them out of large swathes of the country taken over by the group.

The game will be released on the PlayStation 4, Xbox One and PC next year with a few lucky gamers being allowed access to closed alpha testing later this year.

The Yazidis are neither Muslims nor Arabs, and the Kurdish-speaking community follows a unique faith despised by the Sunni extremists.

Hundreds of Kurdish women, including Yazidis, have taken part in the showdown with IS, imposing a reign of terror over areas they seized in Syria and neighbouring Iraq.

IS fighters feel ashamed and terrified at the idea of being killed by a woman because they believe it is forbidden in Islam, according to members of the Women’s Protection Units [YPJ].

The group is the female counterpart to the Kurdish People’s Protection Units [YPG], the armed branch of the leading Kurdish Democratic Union Party [PYD] and key component of the US-backed Kurdish-Arab SDF.