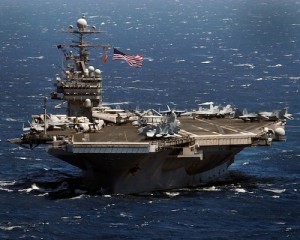 The USS Theodore Roosevelt entered the Persian Gulf Saturday to conduct what a U.S. defense official called routine maritime security operations, days after U.S. warships were deployed to the Yemeni coast to counter an Iranian convoy.

Multiple U.S. officials have said the American ships had been deployed to the region to dissuade the Iranian convoy, which included armed ships, from docking in Yemen, where Iran has been supporting and arming the Houthi rebellion.

The Iranian ships turned away from Yemen on Thursday, and were still sailing northeast toward Iran on Saturday, a U.S. defense official said. They were still in international waters off the coast of Yemen on Saturday, the official said, adding that the convoy was moving slowly and wasn’t expected to reach the Strait of Hormuz for several days.

On Friday, Pentagon spokesman Col. Steve Warren told reporters that there had been no communication between Iranian and U.S. forces at any point.

“I think it’s fair to say that this appears to be a de-escalation of some of the tensions that were being discussed earlier in the week,” Warren said.

Although U.S. administration spokesmen had downplayed the link between the U.S. warships and the Iranian convoy, President Barack Obama said earlier this week that the U.S. was sending “very direct messages” warning Iran against attempts to arm the Houthis.

U.S. officials had stressed this week that Iranian attempts to arm Houthi rebels would be a violation of multiple U.N. Security Council resolutions, and officials have been urging the Iranians to keep away from the turbulent Gulf nation.

The U.S. has walked a fine line as it looks to quell the situation in Yemen. It has sought to reassure Gulf allies like Saudi Arabia that are engaged in a proxy war with Iran in Yemen — allies that support the deposed Yemeni government that had been cooperating with the U.S. in fighting an al Qaeda affiliate. But it is also looking to keep tensions with Iran to a minimum as American diplomats work to secure a final deal on Iran’s nuclear program.

Those negotiations got underway again earlier this week with diplomats from the U.S., five other world powers and Iran working to seal a final accord to curb Iran’s nuclear program and provide Tehran sanctions relief by the June deadline for a deal.