You are here: Home / Senza categoria / USA continues to sidestep a law meant to prevent funds going to armies that use children as soldiers 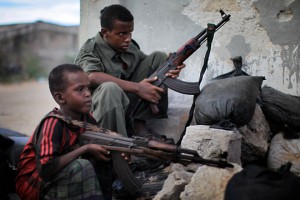 For the fifth year in a row President Obama has waived U.S. law banning arms sales and assistance to countries using child soldiers in their militaries. Since 2010, his administration has provided nearly $1 billion in military aid to countries including Yemen, Somalia, Nigeria and the Democratic Republic of Congo.

“We have been really disappointed with the President’s willingness to waive the sanctions,” said Jo Becker, advocacy director for the children’s rights division at Human Rights Watch. “We believe it gives these governments exactly the wrong message: that they can continue to use child soldiers without any consequences for their military relationship with the U.S.”

The Child Soldiers Prevention Act was passed in 2008 and bans US military assistance and arms sales to governments that use children as soldiers, as determined by an annual report by the State Department. The only way around the prohibition is for the president to issue what’s called a national interest waiver, which Obama has done every year since 2010, the year the law first came into effect.

As a result, only $35 million has been withheld from countries that violate the CSPA, while almost $1 billion has been doled out, according to a study from Stimson, a non-partisan think tank.

Yemen and Somalia have each received over $300 million in military funding over the last five years, according to Stimson, largely to assist their militaries fighting al-Qaeda affiliates in both countries. In the upcoming year, the administration has requested over $1 million go to Nigeria, currently facing an insurgency from the Islamist group Boko Haram (and recently loyal to ISIS), despite that government’s practice of using child soldiers.

“When it comes to the use of children in armed conflict, both the spirit and the letter of the law are clear,” said Jessica Bousquette, World Vision’s Policy Advisor for Child Protection, in a statement provided to Vocativ. “The United States shouldn’t turn a blind eye to countries that use children to support armed conflict. It’s our belief that U.S. taxpayer money should never go to use children as weapons of war.”

The State Department named three other countries using child soldiers who weren’t granted waivers: Myanmar (or Burma), Sudan, and Syria. The White House defended its decision, saying the determinations are made on a “case-by-case basis, based on careful consideration to align with our national interest,” said Myles B Caggins III, a spokesperson for the National Security Council.

However the White House did not specify how it was able to monitor those militaries, and what consequences regarding the provision of funding and arms might occur should they continue to enlist children in their fighting ranks.

Over the last five years, the US has used conditional waivers to some success to extract stricter compliance from nations with child soldiers. Chad was included on the State Department’s list of CSPA violators from 2010-2013, but after international pressure there have been no reported cases of using child soldiers for the past two years.

Still, the repeated unconditional forgiving by the administration of some countries’ use of child soldiers does not encourage those states to change their ways, says Becker of Human Rights Watch. “Where we’ve seen progress is when the U.S. has been willing to withhold assistance with a clear message that the government has to take concrete steps to end their use of child soldiers,” she said. “When assistance is given with no strings attached, the recipient government has little incentive to address the problem.”