You are here: Home / MidEastGulf / US warns Syrian Kurds against forming autonomous region 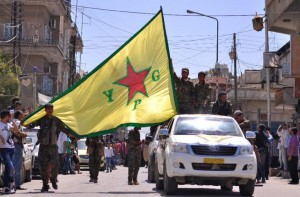 The US would not like to see the Kurdish rebel group People’s Democratic Union (PYD) develop any autonomous zone in Syria, a State Department spokesman said Tuesday.

” We don’t want them developing some kind of semi-autonomous zone. We remain committthe PYD’s military wing, the YPG, ed to the unity and integrity of Syria, territorial integrity,” said Mark Toner. “We’re focused on advancing a genuine negotiated political transition in Syria.”

Asked whether the US is supplying arms to the PYD’s military wing, the YPG, Toner said the US does not give arms to the group but supports it through airstrikes in their fight against Daesh.

PYD rebel group declared “cantons” in northern Syria last year and has worked to establish an autonomous zone along the Turkish border.

The UN, Human Rights Watch and Amnesty International reports on the group’s actions in an area it cleared of Daesh elements found that the PYD committed war crimes by forcing local non-Kurdish groups from their lands and demolishing their homes.

Toner said that any liberated territory from Daesh should be reintegrated into Syria to allow displaced persons to return to their homes.

“It’s a concern that any liberated territory from ISIL [Daesh] is reintegrated into Syria … that there’s not an attempt to just kind of seize and hold territory. That the folks who were displaced are allowed to come back and live there, and that government is allowed to be restored,” he said.