You are here: Home / Senza categoria / US warns Russia of ‘confrontation’ with coalition forces in Syria 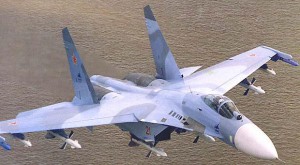 Reports of Russia’s secret build-up of military support for Syria’s President Bashar Assad drew a drastic warning from the US State Department Saturday of potential confrontation with coalition forces fighting the Islamic State in Syria.

While not elaborating on or confirming the accuracy of those reports, the State Department said Secretary John Kerry spoke with Russian Foreign Secretary Sergei Lavrov, saying that Russia’s actions “could further escalate the conflict, lead to greater loss of innocent life, increase refugee flows and risk confrontation.”

The conversation between counterparts came after Western diplomats told Yedioth Ahronoth at the end of August that Russia had an expeditionary force to Syria to set up at a forward operating base and prepare for air strikes against Assad’s enemies by Russian aircraft flown by Russian pilots.

According to the Times, Russia may send as many as 1,000 military personnel to a airfield complete with a portable air traffic control station sent from Russia.

The airfield has been erected near Latakia, where videos have shown Russian armored personnel carriers active in the area in combat against rebel groups.

Photos uploaded to social media from accounts claiming connection to the Nusra Front rebel group have shown Russian combat aircraft and drones in the skies above Idlib.

Meanwhile, sources in both Britain and France said the two governments are considering launching airstrikes against government targets and Islamic State positions in Syria in order to deal with Europe’s current refugee crisis “at its source.”

The Sunday Times newspaper said British Prime Minister David Cameron wanted to hold a vote in parliament in early October to pave the way for air strikes against Islamic State in Syria.

He was also seeking to launch a military and intelligence offensive against people traffickers, the newspaper said, quoting senior officials.

Cameron, under pressure to take more action in response to the migration crisis in Europe, said on Friday that the country would welcome “thousands more” Syrian refugees.

The Sunday Times said Cameron was prepared to accept 15,000 refugees from camps located close to Syria.