You are here: Home / MidEastGulf / US warns Iran against backing Yemen’s rebels: death for nuclear deal? 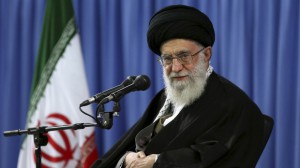 Washington has warned it will not stand by while Tehran supports rebels in Yemen, as Iran’s supreme leader denounced Saudi-led air strikes in the country as “criminal acts” and “genocide”, wrote AP.

In the most direct American criticism yet of Tehran’s backing for the Houthi rebels, US Secretary of State John Kerry said Washington would not accept foreign interference in Yemen.

“There have been – there are, obviously – flights coming from Iran. Every single week there are flights from Iran and we’ve traced it and know this,” Mr Kerry told PBS television on Thursday. “Iran needs to recognise that the United States is not going to stand by while the region is destabilised.”

He added that negotiations over Iran’s nuclear program won’t cause the US “to step away from our alliances”.

Some analysts suggested that the battle for Yemen may further complicate the delicate politics of the nuclear deal. But others argued that the deal had instead emboldened Tehran. “Deep down, the Iranians know that they are winning,” said Michael Stephens, the head of the Royal United Services Institute in Doha, Qatar.

Iranian Supreme Leader Ayatollah Ali Khamenei compared Operation Decisive Storm, led by Saudi Arabia, to the “crimes” that Israel committed during Operation Protective Edge last year in the Gaza Strip. “The Saudis will, for sure, be harmed by this and get their nose rubbed in the dust,” he said in an address on Thursday.

The United Nations said on Wednesday that at least 540 people had been killed in fighting in the last fortnight in Yemen, including 311 civilians, 74 of whom were children. More than 100,000 people had been displaced, it said.

Ayatollah Khamenei dismissed claims of Iranian meddling in Yemen. “They don’t see their own actions as interference and instead they accuse Iran,” he said.

Pointing to the “composure” of Saudi Arabian foreign policy in the past, Ayatollah Khamenei added: “A few inexperienced young people have taken matters of that country in their hands . . . they favour a savage approach to composure and this, for sure, won’t be to their benefit.”

That was a barely concealed stab at Prince Mohammed bin Salman, the son of the new Saudi king, who Saudi diplomats say is about 30. He was made defence minister and chief of the royal court upon his father’s accession to the throne in January, raising eyebrows even among Saudi royals.

Riyadh issued its own warning, saying that two recently dispatched Iranian warships should steer clear of Yemeni waters. “If the ships seek to aid the Houthis, the coalition has the right to choose the proper answer,” said Saudi Brigadier-General Ahmed Asiri.

Some aid trickled into Aden by ship on Wednesday but efforts by the International Committee of the Red Cross to organise cargo flights into the capital Sanaa have so far failed.

At the United Nations, Secretary-General Ban Ki-moon, whose efforts to restart a political dialogue in Yemen have collapsed, implored the Houthis to halt their expansion. But he also has been critical of the Saudi-led military campaign.

“The coalition air raids – and the continuing attempts by the Houthis and their allied armed groups to expand their power – have turned an internal political crisis into a violent conflict that risks deep and long-lasting regional repercussions,” Mr Ban said. “The last thing the region and our world need is more of the chaos and crimes we have seen in Libya and Syria.”