You are here: Home / MidEastGulf / US warns civilians ahead of major ISIS battle in Iraq 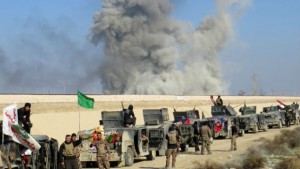 Fears of civilian deaths in Ramadi are growing as Iraqi Security Forces, supported by the U.S.-led coalition, prepare to storm the city and oust the Islamic State in Iraq and Syria (ISIS).

As many as tens of thousands of civilians remain in the city, and could get caught in the middle as the Iraqi forces prepare to do battle against the several hundred ISIS fighters stationed there.

“Yes of course there is concern that civilians will be caught in the crossfire,” said Donatella Rovera, senior crisis response adviser at Amnesty International. “We’ll need to monitor closely.”

U.S. military officials acknowledge the risks to civilians, but say Iraqi air forces have dropped leaflets urging them to leave the city, or shelter in place, for the offensive that could start within the next 72 hours. The U.S. military published those leaflets online on Tuesday.

“We will do everything we can to prevent civilian casualties,” said Operation Inherent Resolve spokesman Army Col. Steve Warren on Wednesday.

The British embassy in Baghdad also tweeted earlier this week, “These leaflet drops are crucial part of efforts to minimise civilian casualties as Coalition liberates #Ramadi from #Daesh control.”

Still, U.S. officials acknowledge it will be difficult for civilians to leave Ramadi, given the tight grip ISIS is exerting on the city. Rovera said the leaflet drops actually started last week, but it has been difficult for people to leave.

“It’s going to be hard for them, there is no question about it,” Warren told reporters on Tuesday.

“It’s fear that enables only several hundred ISIL to hold several thousand civilians, or more, in Ramadi in the first place,” he said, using an alternate acronym for the group.

“As the Iraqi Security Forces draw closer in … it stands to reason that … the civilian population will soon realize that the end is near, and be a little bit less fearful of ISIL’s ability to hold them,” he added.

The Obama administration has come under fire from critics for adhering to restrictive rules of engagement and trying to avoid any civilian casualties in the fight against ISIS. Some say the rules are allowing ISIS fighters to escape.

A U.S. defense official said the current U.S. rules of engagement for airstrikes, which are more restrictive than what the law of war requires, would remain the same as Iraqi forces push into Ramadi.

However, other coalition members — such as France — adhere to looser rules of engagement, and it’s not clear who will be doing the striking in Ramadi.

The U.S. military appears to already be hedging on what standard will be used.

While Warren on Tuesday said the U.S. wouldn’t strike in Ramadi if “we think a strike is going to cause significant civilian harm,” on Wednesday he said the meaning of “significant” is “subjective.”

“Significant is subjective in this case. We weigh the value of the military target,” he said.

Some experts say the administration and the Iraqi government are eager for a victory over ISIS. They say the leaflets are intended to insulate the military from criticism for the civilian deaths that are likely to result from taking the city.

Michael Pregent, a Middle East analyst and former intelligence official, says the leaflets are also to mask what he predicts will be sectarian warfare between the predominantly Shiite Iraqi forces and Sunni civilians.

“Dropping leaflets in Ramadi, knowing that civilians can’t leave — I know what that means. That means that the Government of Iraq will label anyone that stayed a collaborator, or somebody that wanted to stay,” said Pregent, an adjunct fellow at the Hudson Institute.

“They will see no distinction between the Sunni military aged male and an ISIS fighter [who is] anywhere from 12 years old to 60 years old,” he said.

This is not the first time the U.S. has dropped leaflets in anticipation of potential civilian deaths.

The U.S. also quietly changed its rules of engagement for those operations, from aiming for a “zero” risk of civilian casualties to the risk of no more than five civilians being killed, according to a U.S. defense official.