You are here: Home / Europe / US warns Americans in Europe of ongoing terror threat

State Department issues renewed alert ahead of summer months, saying extremists could carry out attacks ‘with little or no warning’ 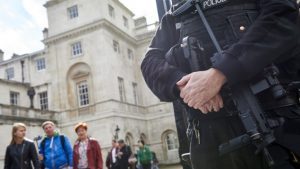 The US State Department is warning Americans living in and traveling to Europe of the ongoing threat of terrorist attacks on the continent through the summer.

In a new travel alert issued on Monday, the department said the Islamic State group, al-Qaeda and their affiliates retain the “ability and to plan and execute” attacks in Europe. It said US officials remain concerned about the potential for future attacks, following a series of strikes in France, Russia, Sweden and Britain.

The department called on Americans to “be alert to the possibility that terrorist sympathizers or self-radicalized extremists may conduct attacks with little or no warning.”

The alert said US citizens should be especially vigilant at large, high profile events, particularly during the summer travel season.

“Terrorists persist in employing a variety of tactics, including firearms, explosives, using vehicles as ramming devices, and sharp-edged weapons that are difficult to detect prior to an attack,” it said.

The department’s last terror alert for Europe was issued on November 21 last year and expired on February 20. Monday’s alert expires on September 1.

Europe has seen a steady drip of jihadist attacks in recent months. IS jihadists have claimed deadly attacks in London, Berlin, Nice and most recently on Paris’s Champs-Elysees.

Experts have said, though, that under the pressure of the international coalition in Iraq and Syria as well as improved efforts by intelligence services, IS has seen its ability to mount complex, group attacks weaken.

Coalition air strikes in IS territory in Iraq and Syria have killed or forced into hiding many organisers of the attacks.

Turkey’s shutting down the migrant route to Europe has also made it much harder for IS followers to move within striking distance of targets like Paris and London.

The attack that killed five people outside the Houses of Parliament in London in March, and others carried out by individuals, “are above all indications of IS’s disintegration,” radicalization expert Farhad Khosrokhavar wrote in March.

These events serve to terrorise the public, “but they are symbolic last stands, which mark the end of a jihadist state that followers… want to be endless but which is coming to an end,” he said.

Into the void left by the smashing of organized rings, have stepped “rather unstable, even marginal, individuals who police have trouble linking to Daesh,” Olivier Roy, a specialist in political Islam, said, using an acronym for the Islamic State.

Yet those attackers come with another dimension of dangers because they often act alone, making them harder to detect. They also do not need anything more than a vehicle or a knife to kill.