You are here: Home / Mediterranean / US ‘war on terror’ thrusts deep into Libya with drone strike

US strikes against al-Qaeda targets could signal a widening of the ‘war on terror’ 18 years after its launch, according to analysts and like reported by middleeasteye.net 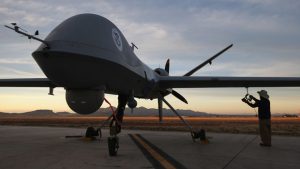 The missile struck its desert city target with deadly effect, killing two high-value al-Qaeda targets in what has become a grimly familiar event in the US “war on terror”. But this drone attack was far from routine – it was the first in south Libya and, according to analysts and local politicians, the first shot fired on a new front in an already war-torn country.

The US military’s Africa Command, or Africom, named one of those killed on 24 March in Ubari as Musa Abu Dawud, a high-ranking recruiter in al-Qaeda in the Islamic Maghreb, or AQIM, which has reportedly been moving higher numbers of men into the south of Libya as it suffers setbacks in Algeria.

And, despite the US president, Donald Trump, a year ago saying his country had no role to play in Libya, the strike also suggests an expansion of US operations in northern Africa in response.

However, analysts and a local politician spoken to by Middle East Eye say the escalation could have dire consequences for a country already torn apart by internal conflict, breed more recruits for al-Qaeda and drag in other regional players as they seek to gain advantage in the oil-rich, strategically important state.

Since Trump came to power, there have been a number of strikes against Islamic State targets in the country, although none in the far south, reports say.

Iain Overton, the executive director of the human rights group Action on Armed Violence told Middle East Eye: “This new target zone is not a surprise. It fits into a wider pattern of the widening out of the so-called war on terror, and the increased desire to use air-dropped bombs as part of that conflict.”

“The death of civilians from air strikes is, in itself, a clarion call for more young men to join the ranks of extremists.”

‘A problem not of our making’

Libya has been riddled with instability since February 2011 protests which led to the toppling of longtime ruler Muammar Gaddafi, with rival militias clashing over territory and resources since the region-wide uprisings, leaving the country with two rival governments.

Guma el-Gamaty, the head of the Taghyeer Party in Libya and a member of the UN-backed Libyan Political Dialogue group, told Middle East Eye that the US was now trying to contain a threat it had contributed to creating – and despite being unable to deal with the problem, Libya would bear the consequences.

“Libya cannot be expected to tackle a problem not of its own making,” he said. “The US and others… may even be indirectly or unintentionally responsible for the rise of these terrorist groups in the first place.”

He said that while the Ubari attack was a first in the deep south of Libya, it was an expansion of previous US action.

Justin Bronk, a research fellow and combat airpower specialist at the Royal United Services Institute think tank, said he believed the drone attack could encourage similar attacks – and not only by the US.

“It would be interesting to see – as countries across the Middle East are acquiring long-range drones – whether there will be an increased use of them on Libya by these countries.”

Bronk said the UAE, for example, had already used similar weapons in support of its preferred faction in the country, Khalifa Haftar in the east of Libya.

Bronk said that as the campaign against IS in Iraq and Syria “winds down”, there could be a switch of US efforts to “known militants” in other areas as military assets become available.

However he added that this doesn’t necessarily signal that the US is aiming to shift its focus to Libya, as it doesn’t want to “increase visible ties to the outcome” of the current “messy” situation in the country.

War after century of peace

Ubari, close to the Libyan border with Chad, Niger and Algeria, has seen conflict rage between its indigenous Tuareg and Tubu tribes, revolving around identity rights, economic assets and control over fuel smuggling in the area. Clashes erupted after a century-old peace treaty between the two groups collapsed in 2014.

And reports suggest the US has for months been building up its capabilities in the area.

Documents released under a freedom of information request last year suggested that the US has established a military base in the southernmost reaches of Libya, amid Trump’s claims of having “no role” in the country.

The base, positioned near smuggling routes from Niger and Chad, and in a region where gun-runners move weapons between Libya, Niger, Chad and Mali, was listed as a “non-permanent” facility.

The documents show that Africom set out plans to convert many “contingency locations” into semi-permanent bases for use by US rapid reaction forces.

The report, by TomDispatch, reveals the projection strategy of Africom, based in Djibouti, and shows dozens of permanent and semi-permanent installations across the continent. It is not known if the Libyan base is still operational.

Denying ‘terrorists’ their freedom of action

Speaking about the Ubari strike, Deborah Jones, who served as US ambassador to Libya from 2013 to 2015, told the New York Times: “This appears to be a continuation of expanding Africom activity in Libya’s ungoverned areas.”

The city, 700km south of the capital Tripoli, is close to smuggling routes that have been used to traffic migrants, fuel, weapons, drugs and other goods across borders and across the country.

During Gaddafi’s rule, Libya’s Arab communities were favoured, to the detriment of its indigenous people.

A spokeswoman for Africom, Robyn Mack, said in a statement last week that the purpose of the strike had been “to deny terrorists freedom of action and degrade their ability to reconsolidate”.

And for Gamaty, the head of the Taghyeer Party, it was the latest in a widening war being fought against enemies on his nation’s soil, who needed to be dealt with.

“In November 2016 there was a big [US] strike destroying a building in Sabratha, near the Tunisian border, where more than 40 Islamic State fighters were holding a meeting,” he said.

“Also the US carried strikes in Sirte when local forces were fighting IS.”

The Obama administration carried out around 500 strikes in 2016 during the battle to recapture Sirte from the Islamic State group.

“The Government of National Accord has very close co-operation with the US government especially in the area of fighting terrorism,” said Gamaty.

The GNA gave official approval for the US to carry out air strikes inside Libya, he said.