You are here: Home / MidEastGulf / US wants Turkey to block Syrian border with 30.000 troops 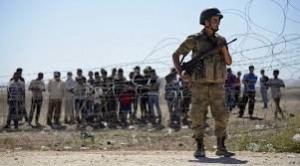 In a recent piece published in the Wall Street Journal, it was claimed that the US urged Turkey to seal its border with Syria with some additional 30.000 troops. In the piece, the daily claimed that the Obama administration requested Turkish authorities to block 98-kilometer stretch of frontier allegedly used by Daesh to move militants in and out of the country.

The Obama administration is urging Turkey to deploy around 30.000 troops along its border with Syria to seal a 98-kilometer stretch of the frontier that U.S. authorities say is used by Daesh terrorist organization to move foreign fighters in and out of the war zone, the Wall Street Journal claimed in a piece published on Friday.

According to the piece, the US hasn’t officially requested a definite number of troops to be deployed on the border, while Pentagon officials estimated that it could take around 30.000 soldiers to seal the border on the Turkish side.

Regarding the “Pentagon’s troop estimates are inflated,” some Turkish officials were quoted as saying in the piece, declining to give a specific number.

The daily also added that the US officials claim a bigger Turkish deployment on the border would be “the most realistic way” to seal key routes the Daesh terrorists use.

In July, US and Turkish officials agreed in principle on cooperation for the securing of the border.

“Turkish officials say they are willing to take the necessary steps, provided the U.S. takes steps as well,” the WSJ said. In addition, “Turkey is determined to clean Daesh from the 98 kilometers of border between Kilis and Jarablous,” a senior Turkish government official was quoted as saying in the piece.

“There is no need to receive any kind of warning or advice from anyone, including our U.S. partners.”

WSJ also added that the US agreed in principle to provide air support for the moderate Syrian opposition forces that Turkey has supported since the Syrian dictator Bashar Assad started killing civilians across the country.

“Turkish officials see those ground operations inside Syria, with U.S. support, as the priority,” the piece added, quoting a Turkish government official as saying “When the operation starts and local forces are making progress, it is obvious to increase troops on our border.”