You are here: Home / Senza categoria / US urges all NATO allies to intensify anti-Daesh attacks 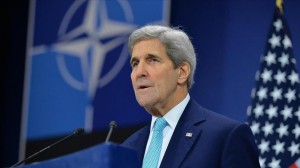 U.S. Secretary of State John Kerry has urged NATO allies to step up the fight against Daesh.

Speaking to reporters at the NATO headquarters following a meeting with foreign ministers of the alliance Wednesday, Kerry said: “I called on every NATO ally to step up support in the fight against Daesh, striking at the organization’s core in Syria and Iraq”.

His comments come as Germany recently approved sending its forces near the Middle East and on the same day as the U.K. is set to vote on expanding its airstrikes against Daesh in Syria.

Kerry backed Prime Minister David Cameron’s decision to seek approval from the House of Commons to expand the U.K. airstrikes in the Middle East to hit Daesh targets in Syria.

“This is a very important step. We applaud his leadership,” Kerry said.