You are here: Home / MidEastGulf / US, Turkey prepared for military action in Syria if political solutions fail

US Vice-President Joe Biden says the United States and Turkey are prepared for a military solution in Syria if a political settlement is not possible. 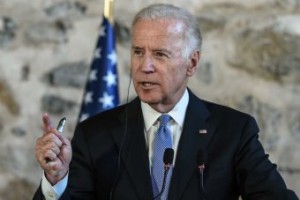 Mr Biden made the comments at a news conference after a meeting with Turkish Prime Minister Ahmet Davutoglu.

“We do know it would better if we can reach a political solution but we are prepared … if that’s not possible, to have a military solution to this operation and taking out Daesh,” he said.

Daesh is the pejorative Arabic acronym for Islamic State insurgents who hold parts of Syria.

He added that Washington recognised the outlawed Kurdistan Workers Party (PKK) in Turkey was as much of a threat to Ankara as Islamic State, and that Ankara had to do whatever was needed to protect its people.

“[Islamic State] is not the only existential threat to the people of Turkey, the PKK is equally a threat and we are aware of that … it is a terror group plain and simple, and what they continue to do is absolutely outrageous,” Mr Biden said.