You are here: Home / MidEastGulf / US-Turkey don’t agree on no-fly zone in Syria because of Kurds 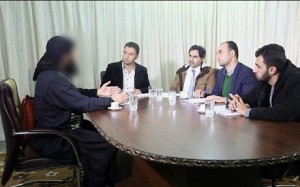 The leader of al-Qaeda’s Syria affiliate, the al-Nusra Front, claimed that the Kurds are the reason that the United States and Turkey do not see eye-to-eye on a no-fly zone over Syria.

“The situation is very complex: Turkey alone cannot impose it (the zone) and America is against it, because it won’t be to the benefit of its Kurdish allies,” Mohammad Jolani said in an interview with four Arab journalists inside territory controlled by the militant group.

Turkey “does not accept a Kurdish political elite on its border and America is supporting the Kurds,” he said in the interview, which was released on social media sites affiliated with al-Nusra or al-Qaeda.

“How come America does not allow a no-fly zone in Syria? Because Kurds will suffer the consequences. They fight ISIS, therefore they are important for America,” he claimed, referring to the Islamic State group.

Turkey has pushed for a no-fly zone across its border in Syria, where it opposes any strengthening of the Kurdish YPG forces that have been fighting against ISIS.

But the United States, which has been helping the YPG with air support in the fight against ISIS, has been lukewarm about the suggestion from its NATO partner.

Turkey is not concerned with the lives of civilians in Damascus and other parts of Syria, Jolani claimed, as he predicted that the Kurds would also be fighting against al-Nusra in the future.

Turkey has been criticized by other NATO allies as a reluctant partner in the war against ISIS. Ankara has turned a blind eye to Islamist groups using its territory for jihads in Syria and Iraq. Since it declared a war on terrorist groups in late July, Turkey has been mainly pounding its own outlawed Kurdistan Workers’ Party (PKK).

Jolani predicted that Turkey’s oppressed Kurds would have their own homeland.

“Allowing the emergence of a Kurdish elite (in Iraq) paved the way for the Kurds in Syria to create an elite, and in the next 20 years there will be another Kurdish elite in Turkey which will stretch to the land of Iran,” he claimed.

Jolani said that his group considers the Kurds as one of their own. “We think they are Muslims too and consider them as part of us.”

He said that al-Nusra had withdrawn from fighting ISIS and would not be part of any coalition against the group.