You are here: Home / Senza categoria / US troop deployment in Cameroon partially a consequence of Libya War 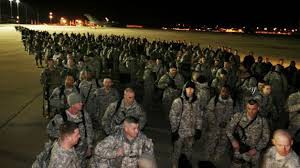 The U.S. intervention in Libya got a brief mention at Tuesday night’s Democratic presidential debate. Hillary Clinton, the frontrunner, defended the decision of the Obama administration, while she was secretary of state, to launch a military campaign in Libya, calling it a humanitarian intervention done at the behest of European and Arab power and an example of “smart power at its best.”

Responding to criticism about the intervention from Jim Webb, another Democratic presidential candidate, Clinton said Obama “made the right decision” on Libya because it brought democracy to the country, which, she noted, held its first free election since 1951. The elections last year were marked by low turnout and clashes between government forces and militants in Benghazi.

A United Nations report released last year, meanwhile, warned of a “considerably deteriorated” security situation in Libya, with the unsecured arms of the former Qaddafi regime (“we came, we saw, he died,” Clinton joked in 2011 even as the Obama administration insisted regime change wasn’t a goal of the intervention) making their way across the region, from Nigeria to Syria, exacerbating conflicts in the region.

Today, in announcing a halt to the U.S. withdrawal in Afghanistan, with 5,500 troops slotted to remain through 2017, President Obama said that the “opportunity for a stable and committed ally” in Afghanistan was worth the extra effort.  “I do not support the idea of endless war, and I have repeatedly argued against marching into open-ended military conflicts that do not serve our core security interests,” he told military personnel that may now return to Afghanistan, telling them he wasn’t sending them into harm’s way lightly.

Yet, as Libya illustrates, the decision about whether a war is open-ended, or even endless, isn’t in the hands of Washington. The Libyan war has been painfully open-ended to Libyans themselves. The U.S. campaign in Yemen, similarly, has been more open-ended than U.S. war planners planned, with a proxy war breaking out in Yemen between Saudi Arabia, a U.S. ally, and Iran, after the U.S.-backed regime was overthrown.

And now President Obama has informed Congress he would send 300 troops to Cameroon, to conduct surveillance, intelligence, and reconnaissance missions against Boko Haram, a Nigerian Islamist militant group that has extended its reach in West Africa.  Boko Haram militants became more adept at being more violent after returning with new weapons and tactics from the battlefields of Mali, Mali being among the first countries to become destabilized in the wake of the U.S. intervention in Libya from which Hillary Clinton and the Obama administration are showing they’ve learned nothing.