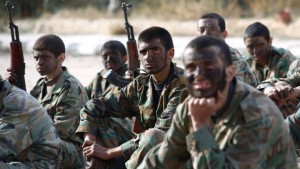 A group of Syrian rebels that includes fighters trained by the United States have declared their refusal to fight al-Qaida’s affiliate in the country, the Nusra Front, following a series of kidnappings by the militant group.

A source in Division 30, which has endured a campaign of kidnappings by the Nusra Front, said they also oppose the American air strikes carried out in the last few days against the al-Qaida-linked fighters.

The statements complicate the American strategy in Syria, which has suffered a string of setbacks and delays, deploying just over 50 fighters dedicated to fighting the terror group Islamic State in the year since its programme to train and equip rebels began.

“With all the immense military power the US has at its disposal, the start to the mission is nothing short of an embarrassment and if it has any hope of succeeding, it needs to show results fast,” said Charles Lister, a visiting fellow at the Brookings Doha Center and an expert on Syrian insurgent groups.

The Nusra Front launched a campaign of kidnappings and attacks against Division 30 shortly after the arrival of the first contingent of 50 to 60 US-trained fighters from Turkey, accusing the group of seeking to spread American influence.

The Qaida affiliate, whose fighters have pledged allegiance to Ayman al-Zawahiri, kidnapped Division 30’s overall commander last week along with six others as they planned an offensive against Isis positions in northern Aleppo.

Nusra then attacked Division 30’s headquarters, killing five fighters and wounding 18 others, as the US-backed rebel group appealed for peace. The American-led coalition that has been assembled to fight Isis bombed Nusra positions in Syria in apparent retaliation.

The US had previously targeted a Nusra-affiliated faction known as the Khorasan Group, which the Americans say is planning attacks against the west from inside Syria. Nusra’s leader has denied the group exists.

Nusra’s campaign against the US-backed rebel unit continued this week, with the Syrian Observatory for Human Rights, a monitoring network with wide contacts inside Syria, saying Nusra kidnapped five more members of Division 30. A source in the US-backed group said those captured were actually families of the fighters.

It is unclear how many of the rebels actually trained by the US have been incapacitated in the campaign, with conflicting reports from activists and the rebel group itself, which says only one of its US-trained fighters has “disappeared”.

In a new statement after the latest spate of kidnappings, Division 30 pledged never to fight Nusra and said it was focused on fighting Isis and the regime of President Bashar al-Assad.

“Division 30 was formed by the honorable sons of Syria to free their nation from Assad’s gangs and Daesh [Isis],” the statement said. “Division 30 pledges before the Syrian people to commit to the principles under which it was formed and to not be dragged into any side battle with any faction, and that it has not fought and will not fight the Nusra Front or any other faction regardless of name or ideology.”

A source in Division 30 told the Guardian the group still has members training with the US and that they opposed American airstrikes against Nusra.

“We have nothing to do with the coalition strikes, that is the truth and we are opposed to strikes against the Nusra Front’s facilities to this day,” the source said. “Our goal is clear – Daesh followed by the regime.”

The latest declarations raise questions about the ability of the US to influence the rebels it has trained on the ground, and the viability of such an effort within Syria’s complex web of insurgent politics and alliances, where Isis and Nusra have emerged as two of the most powerful groups fighting on the ground.

“The group almost certainly does not believe some of the things it has said lately, including protesting at US strikes on Nusra, but you can hardly blame them for such attempts at rescuing their credibility on the ground,” said Lister. “It’s quite telling in fact that a majority of the mainstream opposition now views Division 30 and the train and equip mission with intense suspicion – not only for the lack of regime focus, but for the disastrous start the 54 fighters have had.”