You are here: Home / MidEastGulf / US to send rockets to Iraq for Islamic State group fight 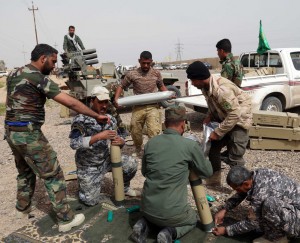 United States officials told reporters Wednesday that the White House was planning a shipment of 1,000 anti-tank rockets to the Iraqi government.
The latest reports come days after the Islamic State group took full control of the city of Ramadi, the regional capital of the western Iraqi province Anbar. The latest gain by the extremist group sent waves of Iraq troops fleeing the city. The group used a series of suicide car bombing over several days to clear the way for its fighters to enter the city. The officials told the New York Times that the latest rockets shipment was to be used to counter the suicide bombings.
The shipment is expected to arrive in Baghdad in the early days of June. The decision by the White House is the first in a series of different options being weighed by President Barack Obama, officials said. They added that the anti-tank rockets were requested by the Iraqi Prime Minister Haider al-Abadi, during his visit to Washington last month.
Iraqis were “licking their wounds a bit” as they worked with U.S. advisers to begin planning a counterattack, a senior State Department official, who spoke to reporters on the condition of anonymity, was quoted as saying by the New York Times on Wednesday. Following the Ramadi fall for the Islamic State group, more than 3,000 Iraqi Shiite fighters arrived at a military base near the city on Monday, joining Iraqi troops and Sunni tribal fighters in the area as they plan to push back against the group.
Amid delays in delivery of some U.S. weaponry that Iraq has been expecting under an agreement with Washington, Abadi is also seeking help from other governments. On Wednesday, he paid an official visit to Russia in which he asked for further military assistance from Moscow. The focus will be “the development of relations between the two countries, mainly expanding the military and security cooperation, and support for Iraqi forces in the face of terrorism,” Abadi’s office said. Russia has been a supplier to Iraq of weapons, including fighter jets, helicopters and smaller arms, for some time. Also, Baghdad is said to be increasingly looking to China and Iran for military purchases.