You are here: Home / MidEastGulf / US to send further military supplies to Peshmerga 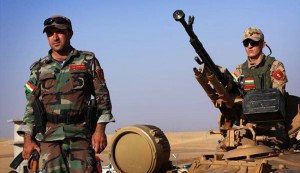 Continuing its military support to the Kurdish Peshmerga forces fighting Islamic State (IS) in northern Iraq, the US government has decided to send extra military shipments to Erbil.

Kurdish Member of the Iraqi Parliamentary Committee for Security and Defence Affairs Shakhawan Abdullah told BasNews that in a meeting with Stuart Jones US Ambassador to Iraq, the US official confirmed the news.

BasNews understands that the shipment will include weapons, ammunition and military equipment.

The MP claimed that operations to liberate Mosul and Hawija are approaching, and the Peshmerga forces are fully prepared for any eventuality.

Since the start of IS crisis in northern Iraq last year, the US and its international coalition members have enhanced Peshmerga capabilities with military equipment and training programs.