You are here: Home / MidEastGulf / US to establish two military bases in eastern Syria as tensions with Turkey rise 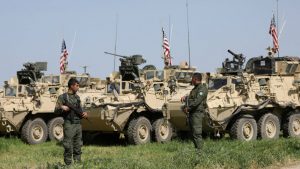 The US is establishing two military bases in Syria for use after the defeat of the Islamic State (IS), Defense News reported according to kurdistan24.net.

One is near Raqqa, at Tabqa, where there is a Syrian air base that US forces have taken over for purposes of training and advising the Kurdish-led Syrian Democratic Forces (SDF). The other site is at al-Tanf, on the Iraqi-Syrian border, near the al-Waleed border crossing, where the US has been training and supporting an Arab force to fight IS.

Over the past week, US officials have increasingly spoken of a continuing US presence in eastern Syria, even after IS’ defeat.

On Thursday, Acting Assistant Secretary of State for Near East Affairs, David Satterfield, revealed to the Senate Foreign Relations Committee that the US had an alternate plan for Syria, in the event that the UN-sponsored talks in Geneva failed to produce an agreement.

In that case, Satterfield said, the US would remain in eastern Syria to provide an alternative political model within the country to Assad’s brutal rule and to counter “Iran and its ability to enhance its presence in Syria.”

On Saturday, Col Thomas F. Veale, a Public Affairs Officer for the US-led coalition in Iraq and Syria (CJTF-OIR), told The Defense Post that the Coalition is working with the SDF “to establish and train” a new Syrian Border Security Force (BSF).

At present, some 230 people are training in the BSF’s first class, “with the goal of a final force of approximately 30,000,” Veale said.

That force will include 15,000 SDF veterans of the war against IS, with another 15,000 more to be recruited and trained.

The new force is to be posted along the Euphrates River Valley in the west and the Turkish and Iraqi borders in the north and east.

The force will “reflect the populations” of the area they protect, Veale said. That implies that Kurds will constitute the force along the Turkish border, while Arabs will operate further south.

On Sunday, CJTF-OIR Spokesman Col. Ryan Dillon expanded on the US plan in communications with other media outlets.

As Dillon explained, “This force is designed to establish security that supports the lasting defeat of [IS], prevents the conditions under which it can re-emerge and restricts the flow of foreign terrorist fighters into Iraq, Turkey, and Europe.”

The statements from CJTF-OIR officers brought strong opposition from Syria, and its Iranian and Russian allies, as well as Turkey.

Syria’s official news agency, SANA, vowed that Syrian troops would “end the presence of the US” in the country, while an Iranian Foreign Ministry Spokesman denounced the US plan as “clear interference” in Syria’s internal affairs.

Russian Foreign Minister, Sergei Lavrov, charged that the US was still seeking to change the regime in Damascus and suggested that the US sought Syria’s partition.

Turkey, however, raised the strongest, most serious opposition, and it may lead to further conflict.

Turkish forces responded by shelling the Kurdish canton of Afrin in western Syria, while President Recep Tayyip Erdogan repeatedly protested that the US “was forming a terror army on our borders” as he threatened to attack the “terror nests.”

Fearful of an impending assault, civilians have begun leaving the Afrin area, the Turkish press has reported.

Late on Tuesday, Turkish Foreign Minister, Mevlut Cavusoglu, who was attending a conference in Vancouver, Canada, where he met US Defense Secretary Jim Mattis and Secretary of State Rex Tillerson, warned that any Turkish military operations could reach beyond Afrin.

“Turkey’s precautions against the [People’s Protection Units (YPG)/ Kurdistan Workers’ Party (PKK)] cannot be limited to only Afrin. There is also Manbij and east of the Euphrates River,” Turkish media cited Cavusoglu as saying.