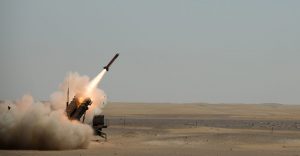 The United States will deploy 200 support personnel to Saudi Arabia to accompany a new Patriot air-defense missile battery and four Sentinel radar systems, the Department of Defense said according to thedefensepost.com.

“This deployment will augment the kingdom’s air and missile defense of critical military and civilian infrastructure,” Pentagon spokesperson Jonathan Hoffman said in a Thursday, September 26 statement. “This deployment augments an already significant presence of U.S. forces in the region,”

U.S. Defense Secretary Mark Esper also approved putting additional forces on prepare-to-deploy orders, including two further Patriot batteries and one Terminal High Altitude Area Defense (THAAD) system, though no final decision to deploy them has yet been made.

The Houthis took credit for the September 14 oil pipeline attack, and Iran has denied involvement.

But Saudi and U.S. officials have pointed to what appears to be drone and cruise missile debris at the oil refineries, expressing disbelief that Yemen’s rebels could launch such a sophisticated attack. The Saudi government said Wednesday the attack was “undoubtedly sponsored by Iran.”

In a joint statement released on Tuesday, the leaders of the United Kingdom, France and Germany said “Iran bears responsibility” for the attack, adding that there is “no other plausible explanation.”

“It is important to note these steps are a demonstration of our commitment to regional partners, and the security and stability in the Middle East,” Hoffman said in Thursday’s statement.

“This follows the Secretary and Chairman’s extensive outreach to partners in the region, and around the globe. Other countries have called out Iranian misadventures in the region, and we look for them to contribute assets in an international effort to reinforce Saudi Arabia’s defense,” Hoffman said.

In May, President Donald Trump approved a plan to deploy around 1,500 U.S. forces and a Patriot battalion to Saudi Arabia and the administration informed Congress that it was invoking a provision of the Arms Export Control Act that would eliminate Congressional review of the sales of precision-guided munitions to Saudi Arabia and the United Arab Emirates.

Raytheon’s Sentinel is a 360-degree short-range air-defense radar system that may complement existing Saudi air defenses, which have been concentrated in southern Saudi Arabia in response to repeated ballistic missile and drone attacks.

The U.S. Department of State has approved the sale of Patriot and THAAD to Saudi Arabia in deals potentially worth over $15 billion.