You are here: Home / MidEastGulf / US to deploy Marines Detachment to fight Daesh in Iraq

The United States will deploy a detachment of marines to support Iraqi government in its fight against Daesh militant group, the US Central Command (CENTCOM) said in a statement on Sunday. 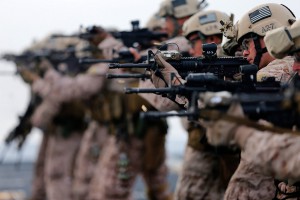 According to the statement, at the moment the MEU was deployed in the area of the US 5th Fleet’s area of operations, which included the Persian Gulf, Red Sea, Arabian Sea and parts of the Indian Ocean.”In consultation with the Government of Iraq, Combined Joint Task Force — Operation Inherent Resolve (CJTF-OIR) has assigned a detachment of U.S. Marines from the 26th Marine Expeditionary Unit [MEU] to the support of Iraqi Security Force and Coalition ground operations. The detachment from the 26th MEU will add to the Marines and Sailors currently in Iraq in support of the CJTF-OIR campaign to defeat Da’esh,” the statement reads.
http://sputniknews.com