You are here: Home / West Asia / US to decide on troops level in Afghanistan after the fighting season 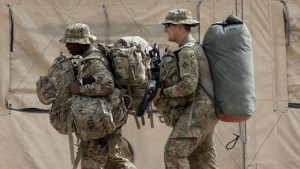 The United States will decide regarding the troops withdrawal timeline from Afghanistan after the ongoing fighting season, the US Permanent Representative to NATO said.

In response to a question regarding the deteriorating security situation and announcement of troops withdrawal timeline from Afghanistan by 2016, Ambassador Douglas Lute, said “Whether or not the U.S. adjusts its timeline is a decision to be made in Washington after this fighting season. Presidents Ghani and Obama agreed — I believe the visit was in February or March of this year — that this would obviously be a fighting season during which the Afghan forces would be tested. I think that’s proving to be true.”

He said, “In the aftermath of this fighting season, given the current level of support, they agreed that together they would take an assessment as to progress this year and what the challenges of the future lay.”

“I don’t have a forecast for you on how that assessment will go, but I think we can agree that this is a real challenge. This will be, has been so far, and will continue to be a challenging year for the Afghan Security Forces,” Ambassador Lute added.

He also added that United States will remain the major troop contributor to the NATO mission in Afghanistan beyond 2016.

“I won’t forecast what our numbers will be beyond 2016, but I think it’s safe to say that we’ll still be a major contributor to the NATO mission beyond 2016,” Ambassador Lute said, adding that “And the numbers, quite frankly, aren’t complete yet.”

He said “We’re still working closely with our Afghan government colleagues to define exactly what tasks will be done, and this always begins with the tasks, and then we add the numbers after the tasks. So we’re still in the process of figuring that out. But I think it’s safe to say the U.S. will be a major contributor.”