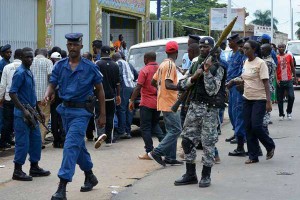 The US government has urged its citizens in Burundi to leave “as soon as it is feasible to do so” as violence continues to rock the troubled country.

This follows the latest violence in Burundi that left at least 87 people dead.

With the intensifying violence in country, the US State Department Sunday issued a firmly worded travel warning that it is ordering dependents of US government personnel and all non-emergency US personnel to leave Burundi.

“Armed groups operate in Burundi and gunfire and grenade attacks occur with frequency,” the warning stated, but noted that such violence is “usually not directed at foreigners.”

The US is sounding this alarm following a sharp escalation in the killings that have become a regular occurrence in Burundi’s capital, Bujumbura.

At least 87 people are reported to have been killed on Friday, many of them in what the government described as attacks on military facilities by unidentified gunmen.

Political violence is taking place throughout the country, the State Department said.

“Travel outside Bujumbura presents significant risks, especially after nightfall,” the warning said, noting that US embassy employees in Bujumbura are prohibited from traveling outside the city from dusk to dawn.

“Armed criminals ambush vehicles, particularly on the roads leading out of Bujumbura,” the US said.

Threats to life are not linked solely to the chaos that is engulfing Burundi in the aftermath of President Pierre Nkurunziza’s contested re-election to a third term in office, the US suggested.

“Corruption is endemic in Burundi and contributes to an environment where the rule of law is not respected. Criminals who have bribed local officials may operate with impunity.” the travel warning declared.