You are here: Home / MidEastGulf / US spied on Israel, prepared to destroy Israeli bombers to protect Iran 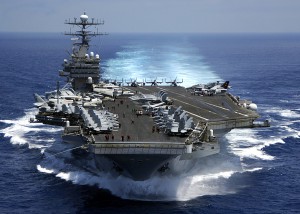 US moved carriers into the region to prevent Israeli craft from attacking suspected Iranian nuclear plant.

United States has been spying on Israel in order to prevent the Jewish State from attacking suspected Iranian nuclear sites, according to Wall Street Journal.

The White House had sent an additional aircraft carrier to the region after learning that Israeli aircraft had flown into Iranian airspace in what U.S. officials feared was a test run for an attack on Iran’s Fordow plant.

The carriers had attack aircraft on board prepared to respond to any Israeli attack on Iran.

If that wasn’t enough to strain the conceit that the U.S. is Israel’s strongest supporter, U.S. officials also revealed to the Journal that Israel was responsible for the assassination of Iranian nuclear scientists.

Several U.S. officials also claimed that Israel wanted to strike Iran in 2012, and that the United States pressured Israeli officials into retreating.

The U.S. attempted to keep its nuclear power negotiations with Iran concealed from Israel because of disagreements over the extent to which Iran should be permitted to pursue a nuclear program.

Israel took the position that because Iran has an abundance of energy resources, it had no peaceful purposes for its nuclear program.