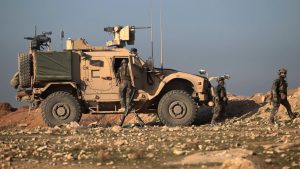 The anonymous officer didn’t provide details with regard to the number of Special Forces involved due to restrictions on talking to the media.

The source added, the Special Forces units were transported within a military convoy arriving from Al-Bakr airbase to Anbar’s Ain al-Assad in Baghdad.

“They arrived fully-equipped to take part in the anticipated liberation of the cities of Anah, Rawa and Al-Qaim,” The military officer stated.