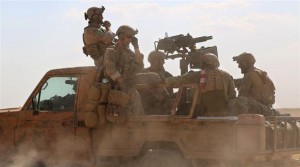 As U.S. Special Forces joined Turkish troops and Free Syrian Army (FSA) fighters along the Turkish border near Jarablus and al-Rai in Syria, Turkey-backed forces have continued advancing to the southern areas of northern Syria.

Pentagon spokesman Jeff Davis told reporters that U.S. commandos had joined the Turkish military and “vetted Syrian opposition forces” fighting the Islamic State of Iraq and the Levant (ISIL) near Jarablus and al-Rai.

The move came “at the request of the government of Turkey,” Davis said.

“U.S. personnel operating with Turkish forces and Syrian opposition forces will provide the same train, advise and assist support they have been providing to other local partners in Syria fighting ISIL,” Davis wrote in an email to state-run Anadolu Agency on Sept. 16.

The new development comes as the FSA, backed by Turkish artillery earlier in the day, began to move toward ISIL stronghold al-Bab, nearly 30 kilometers (20 miles) south of al-Rai as a part of Operation Euphrates Shield, which was launched Aug. 24 by Ankara. It aims at improving security, supporting coalition forces and eliminating the terror threat along Turkey’s border using FSA fighters backed by Turkish armor, artillery and jets.

The Syrian town of al-Rai and Jarablus were recently cleared of ISIL militants as part of the operation.
Davis said the U.S. would continue to support the counter-ISIL fight in northern Syria because “access to the Syria-Turkey border region is strategically important to ISIL’s operations in Syria and Iraq as well as the group’s attempts to export terror to Turkey, the wider region, Europe and the United States.”

“Denying ISIL access to this critical border cuts off critical supply routes in and out of Iraq and Syria and further isolates ISIL’s so-called ‘capital’ in Raqqa,” he added.

Footage widely shared online by Syrian groups and experts appears to show U.S. commandos in al-Rai insulted by FSA fighters, who call them “pigs” and “infidels” in Arabic, demanding they leave Syria, according to AFP.

A U.S. defense official admitted there had been a “misunderstanding,” but insisted the troops were still deployed and that the matter had been cleared up.

“There’s been no violence, no one is hurt and we are still there,” the official said. “I have no report of a hostile or violent action.”

Operations in al-Rai continued with exploration, observation and target acquisition, the military added.

The U.S.’ top general, Chairman of the Joint Chiefs of Staff Gen.Joseph Dunford, met with Turkish counterpart Gen. Hulusi Akar on the sidelines of a NATO chiefs of staff meeting in Croatia on Sept. 16 to discuss the anti-ISIL group fight.

His assistant, Cpt. Gregory Hicks, said the generals met “to advance discussions on the way forward in the fight against ISIL and recommitted to the close military-to-military and strategic relationship the U.S. has with Turkey,” AFP reported.