You are here: Home / MidEastGulf / US Special Forces in combat: Is it really nothing new for Iraq and Syria? 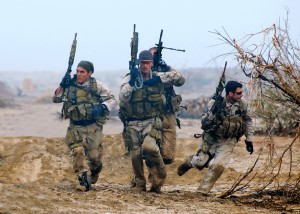 The United States recently unveiled a new approach in Iraq and Syria it insists is not new at all: special forces will be sent into direct combat. “The fact is that our strategy… hasn’t changed,” Josh Earnest, the White House press secretary, said. “This is an intensification of a strategy that the president announced more than a year ago.”

The press secretary is right if you take him at his exact words: the deployment of Special Forces does not change America’s grand strategy, it only changes the on-the-ground tactics.

Something tactically new, something strategically old

Tactically, downplaying these moves as intensification, or as somehow not boots on the ground (one imagines American special forces hopping from foot to foot to protect Washington’s rhetoric) is silly. America has entered a new stage, active ground combat, and anyone who thinks a handful of Special Forces is the end of this is probably among the same group who believed air power alone would resolve matters a year ago.

However, in the bigger picture, the White House is spot-on. Broader strategy for the Middle East has not changed at all. That is baked into the American belief that there is an imposable solution to every foreign problem, and that it is the responsibility of the US to find and implement that solution. This thinking has rarely been even close to right since the Vietnam War, and is most certainly wrong when looking at the Middle East in 2015. It has led directly to the mess in Iraq and Syria, and remains tragically unchanged.

The state of Iraq and Syria is not pretty.

Iraq the nation is no more, replaced by a Kurdish confederacy in the north, a Shia-controlled south and a semi-governed ISIS-Sunni area to the west. Syria is divided into a northern area increasingly under Kurdish control, a southern section still under Assad’s rule, and a lot of contested space being fought over by the United States, Russia, Britain, Jordan, Turkey, France, Canada, Australia, Iran, a handful of Gulf nations, Islamic State, its cohorts, Bashar Assad’s forces, the Kurds, and a complex mélange of local religious and tribal alliances.

But no unicorns.Those mythical creatures, the moderate rebels of Syria, couldn’t be created via wishing, hoping or training, and the forces the US now supports in Syria are either Kurds out for their own interest in creating a nation-state (that the US is facilitating the non-Arab Kurds to “liberate” Arab lands will be long-noted in the region) or the usual collection of thugs. America will no doubt soon dub them all freedom fighters. Is the name “Sons of Syria” already taken?

American goals in Iraq seem to be along the lines of destroying ISIS and unifying the country. In Syria, the goals, as best as can be discerned, are to destroy ISIS and depose President Assad.

The problem with “destroying ISIS” is that every time the United States kills off some fighters, ISIS simply gets more, using as their recruiting tool the American military’s return to Muslim lands. ISIS is the physical embodiment of a set of ideas – religious, anti-imperialist, anti-Western – and one cannot blow up ideas. Unless a popular rebalancing of power likely favouring a version of Islamic fundamentalism is allowed to take hold and create some measure of stability, count on the US fighting the sons and grandsons of ISIS for years to come.

The other American goals are equally far-fetched.

Obama is the fourth American president to bomb Iraq, and inevitably his successor will be number five. Yet even after decades of bombing and years of occupation, fiddling, reconstructing and meddling, the United States has not pulled Iraq together. Special forces cannot accomplish what all that already failed to do.

An Assad-less Syria is possible, following an assassination, a coup, or perhaps a plane crash. However, removing one government, then hoping another will emerge Big Bang-like, has a very poor track record (see Iraq with Saddam and Libya with Gaddafi.) Any negotiated form of regime change in Syria, such as an offer of exile to Assad, is now subject to a Putin veto, given Russia’s military presence there.

It is unlikely in the extreme that more American involvement, never mind a mere handful of Special Forces, will have much effect in either Iraq or Syria. But the US is escalating anyway.

But the US must do something… right?

But what if there is no “solution” in Iraq and Syria but to allow, however reluctantly, the forces now in play to find their own balance? The outcome will undoubtedly be distasteful to many in Washington, some sort of Syrian state with Russian allies, a Shia Iraq with Iranian supporters, an ISIS-Sunni statelet, and a trans-border powder keg of Kurdish nationalism on the loose.

But whether America takes a deep breath of realism and steps back or not, there is little that can be done to change any of those things anyway; the Iraq invasion, if nothing else, made clear the American military cannot dictate policy outcomes in the Middle East. American force might postpone the changes, or allow friends like the Kurds a more favourable bargaining position, but that’s about it, Special Forces or no Special Forces.

But what about ISIS?

The idea that absent American intervention Islamic State will pop up in Times Square is simply a new flavour of the old scare tactic politicians have consistently used to cow the American public. The bogeyman has just seamlessly changed from Communists to Sandinistas to post-9/11 al-Qaeda to Saddam to the Taliban to ISIS. Note that despite American intervention, Islamic State is as strong or stronger now than it ever has been, and yet has never directly struck outside its own neighbourhood. Indeed, as a terror group, ISIS must already know it is accomplishing most of its political goals vis-a-vis the US using only Twitter.

As for Islamic State being evil, they are. Yet in a time when hospitals are bombed by America in Afghanistan and by its Saudi allies in Yemen, and when civilian areas in Gaza are shelled by ally Israel, one should be careful when invoking morality.

Maybe they were right all along

Ironically, after Syria’s Arab Spring became a civil war, the White House met with Pentagon planners, looking for options. They came up empty-handed. “Nobody could figure out what to do,” a senior Pentagon official said.

They may have had it right from the beginning: there was nothing the US could do. What some call Obama’s indecisiveness may have just been realism. History, as well as his political enemies, is likely to claim Obama “lost” Iraq and Syria. That is unfair, as it presumes that it was ever possible to win.

And so perhaps the White House is right in characterising the deployment of special forces into a combat role as nothing really so new. What is happening now in Iraq and Syria is just the dragging of the same decades-old failed strategy forward.