You are here: Home / MidEastGulf / US special forces arrive in Iraq: defense chief 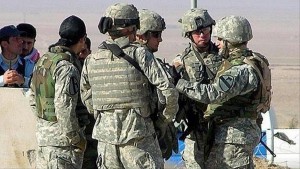 The U.S. defense chief said Wednesday that special forces troops that were announced last month to be deployed to Iraq have arrived in the country.

“The specialized expeditionary targeting force I announced in December is now in place and is preparing to work with the Iraqis to begin going after ISIL’s fighters and commanders, killing or capturing them wherever we find them, along with other key targets,” said Ash Carter as he briefed service members who will soon be deployed to Iraq.

He said the anti-Daesh campaign has three prongs, namely “destroying the parent tumor” of Daesh in Mosul, Iraq, and al-Raqqa, Syria; preventing the militant group’s “metastasizing in areas such as North Africa, Afghanistan, and Yemen” and protecting the U.S. homeland.

He also noted his meeting with his counterparts from France, Australia, Germany, Italy, the Netherlands and the United Kingdom in Paris to discuss the fight against the militants.

When Carter initially announced the special forces deployment, he said the troops would “conduct raids, free hostages, gather intelligence, and capture ISIL leaders,” as part of a revision of the anti-Daesh strategy.

A spokesman for the anti-Daesh coalition later said the forces would not exceed 100 troops.

The Pentagon also deployed approximately 50 special operation forces in Syria to assist and advise anti-Daesh forces in the north, including the Kurdish rebel Kurdistan Union Party, or PYD, Turkmens and Syrian Arabs.