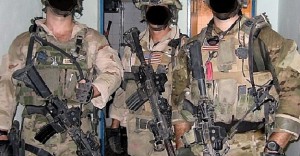 Austin said that the special operations team was there to “advise and assist” and that they were “not engaged in any combat operations”.

However, Central Command later clarified that Special Operations is working with Kurdish forces in northern Iraq, raising doubt if special forces work with the YPG on the ground or not.
The YPG is affiliated to rebels of the Kurdistan Workers’ Party (PKK) in Turkey that are fighting the Turkish army after the end to the peace process in the summer.

US assistance to the YPG might raise more tensions with NATO-ally Turkey.

The revelation comes after a meeting between PYD co-leader Salih Muslim and Iraqi Kurdish president Masoud Barzani in the presence of US officials to discuss the fight against Islamic State (IS) in Syria and Iraq.

Kurdish Peshmerga forces and the YPG forces have been recognised as the most effective forces in pushing back IS militants by defence officials.

“We see them [Peshmerga] as well as the anti-ISIL [IS] forces up in Syria [the Syrian Kurds] being able to make considerable gains against Daesh, when enabled by coalition airstrikes,” said Brigadier General Thomas D. Weidley, Chief of Staff of the anti-IS coalition said in praise of the Kurdish force in June.