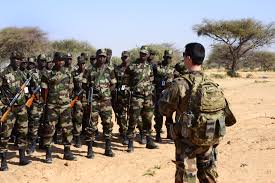 American soldiers have begun training units of Niger’s army at the edge of the Sahara Desert, in what a U.S. official calls a “new wave” of military support for African states battling Boko Haram militants.

More training will follow for national armies in Cameroon, Nigeria and Chad, the official told VOA, speaking on condition of anonymity. Extremists from Boko Haram are based in northeastern Nigeria, but they have carried out notorious attacks throughout the Lake Chad region – Niger, Chad, Cameroon and Nigeria.

Training in Niger began on October 19 at Agadez, the largest city in central Niger, once a center for caravans crossing the Sahara.

What training will cover

About 40 American soldiers who arrived last week at Niger-controlled Air Base 201 will provide eight weeks of training to about 150 Nigerien troops. Prichard said instruction will cover basic soldier skills, including small-arms marksmanship.

The U.S. embassy in Niger says the training program is expected to last a few months, with a goal of enhancing “the professional skills of the Nigerien military personnel with an emphasis on airfield security procedures.”

Some U.S. Air Force members also will be involved in the training at Agadez. The U.S. Africa Command spokesman said airmen will arrive in early 2016, after the Army’s two-month program is completed, to teach those same 150 Nigerien soldiers airfield security procedures.

Prichard said the U.S military has recently carried out other training in Niger, but “nothing as big as what’s going on now.”

The U.S. Defense Department has about 250 personnel in Niger, providing embassy security, training and intelligence gathering.

Current U.S. military efforts in nearby Cameroon—now set to help with airborne surveillance—will “eventually evolve into training” as well, a U.S. official told VOA on the condition of anonymity.

The troops were invited by Cameroon’s government as part of a larger international effort to stop the spread of violent extremists in West Africa, a U.S. defense official said at the time.

The need for international action has become “more urgent as Boko Haram and other organizations ramped up their violent activities,” the defense official added.

Nigeria, the home base of Boko Haram militants, and Chad also are expected to receive training and other military support from the United States in the coming months, according to the U.S. official.

“The short answer is, ‘yes,’ there is something going on in Nigeria,” the official said.

While U.S. officials have urged that training be used to fight extremists, military aid has been sent to these African countries without restrictions on the purpose of U.S.-funded programs.

“This training is part of U.S. AFRICOM’s core mission to help our partners strengthen their defense capabilities,” Prichard said. “The skills gained during these military-to-military exchanges can be used by the participants for a broad range of activities to secure their home countries or contribute to a regional security effort.”